Zinc: it’s an essential element that has many important roles in the body. It’s a popular dietary supplement and an ingredient in many shampoos. What’s more, zinc also shows promise in treating a number of hair loss conditions such as androgenetic alopecia and alopecia areata. So how are zinc and hair loss linked? Let’s take a look.

The role of zinc 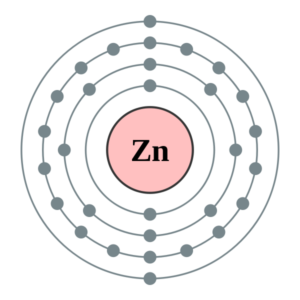 There are many different types of hair loss – and zinc is linked to many of them in some way.

Zinc plays an essential role in the body. Among other things, it’s responsible for:

The most obvious link between zinc and hair loss is zinc deficiency (hypozincemia). And one of the first symptoms of this is hair loss.

A zinc deficiency messes with collagen and keratin production – the two most important proteins for hair growth. Not only that, it can reduce sebum production – a natural oil that keeps hair healthy.

Of course, there are many other causes of hair loss besides deficiencies of minerals such as magnesium and zinc. And in the modern world of multivitamins and fortified foods, zinc deficiency is rare.

Even so, zinc may still be of interest to hair loss sufferers. It’s a popular ingredient in shampoos and, when applied topically to the scalp, has been shown to tackle the root cause of the most common form of hair loss – androgenetic alopecia.

Androgenetic alopecia – or pattern hair loss as it’s often called – is by far the most common cause of hair loss.

It affects around 70% of men and 40% of women at some point in their lives.

And while the female version isn’t completely understood, scientists have identified the main cause of male pattern hair loss: dihydrotestosterone (DHT).

DHT is a metabolite of testosterone – the male hormone. It’s created when testosterone interacts with 5 alpha-reductase.

And this hormone is around 2.5x – 10x more potent than ordinary testosterone. It binds to receptors in the hair follicle and over time causes men to go bald.

So where does zinc come in?

Well, according to this study, zinc has the potential to completely inhibit 5 alpha-reductase activity. In other words, it stops testosterone converting to DHT:

“The effects of zinc sulphate and azelaic acid on 5 alpha-reductase activity in human skin were studied using an in vitro assay with 1,2[3H]-testosterone as substrate. When added at concentrations of 3 or 9 mmol/l, zinc was a potent inhibitor of 5 alpha-reductase activity. At high concentrations, zinc could completely inhibit the enzyme activity. […] Vitamin B6 potentiated the inhibitory effect of zinc, but not of azelaic acid, suggesting that two different mechanisms are involved. When the three substances were added together at very low concentrations which had been shown to be ineffective alone, 90% inhibition of 5 alpha-reductase activity was obtained. If this inhibition is confirmed in vivo, zinc sulphate combined with azelaic acid could be an effective agent in the treatment of androgen related pathology of human skin.”

To find out more about the other compound used in this study – azelaic acid – check out this article.

Anyway, the effects described in this study could make for a very effective hair loss treatment. We already have drugs that reduce 5 alpha-reductase levels – for example finasteride – but these work by reducing overall levels in the body. For some, this can lead to unpleasant side effects.

But a topical 5 alpha-reductase inhibitor such as zinc could avoid these problems by only reducing levels in the area we want it to – i.e. the scalp.

Before we get carried away, though, it’s important to note that this was an in vitro study. In other words, it wasn’t tested on live human subjects. And despite it being almost 30 years since these effects were observed, there appears to have been no clinical trials of the effects of zinc on live human scalps.

Zinc may also be beneficial for treating another, less common, form of hair loss: alopecia areata.

Alopecia areata is an autoimmune response where the body no longer recognises its own hair cells and attacks them. It’s characterised by distinctive circular patches of hair loss that can occur anywhere on the scalp.

Around 1%-2% of alopecia areata cases lead to the entire loss of hair on the scalp (alopecia totalis).

And there is a fairly large body of evidence to suggests that zinc supplementation helps alleviate this condition.

For example, this study found that sufferers of alopecia areata had lower serum levels of zinc in comparison to healthy controls:

What’s more, zinc supplementation may improve the symptoms of alopecia areata, as suggested by this study:

“Fifteen alopecia areata patients were enrolled in this study. After the therapy, the serum zinc levels increased significantly from 56.9 µg/ to 84.5 µg/dl. Positive therapeutic effects were observed for 9 out of 15 patients (66.7%) although this was not statistically significant. The serum zinc levels of the positive response group increased more than those of the negative response group (p=0.003).“

Although these results were only observed in a very small sample size, they are promising. The correlation between increased serum zinc levels and the positive response group seems more than simply coincidental.

But perhaps the strongest evidence supporting zinc for the treatment of alopecia areata is this study. Not only did a statistically significant number of patients experience hair regrowth, they kept their hair even after stopping treatment:

Another related use for zinc is the prevention of dandruff.

Zinc – specifically zinc pyrithione – is a common ingredient in many anti-dandruff shampoos such as Head and Shoulders.

Studies show that zinc pyrithione is effective in reducing malassezia yeasts in the scalp. As well as reducing dandruff, this has the added benefit of reducing hair follicle inflammation.

And inflammation and androgenetic alopecia are strongly linked.

So shampoos that contain zinc can help alleviate this common symptom of male pattern hair loss. And while it is still up for debate whether inflammation actually causes hair loss, there can be little doubt that there is a correlation between the two.

That said, zinc shampoos were found to be less effective at preventing dandruff and inflammation than ketoconazole:

“It is concluded that after a 4-week treatment, [ketoconazole] 2% shampoo was significantly superior to [zinc pyrithione] 1% shampoo in the treatment of subjects with severe dandruff or seborrheic dermatitis of the scalp.”

So while zinc may be of some benefit, there are better hair loss shampoos out there. Find out more about ketoconazole shampoo for hair loss here.

As we’ve seen, there are plenty of potential applications for zinc in the fight against hair loss.

But it’s not as simple as taking a zinc supplement every day to grow a thick head of hair.

The usefulness of zinc depends, firstly, on what kind of hair loss you are experiencing. Dietary zinc supplements appear to be most useful for sufferers of alopecia areata, not male pattern hair loss. In fact, zinc supplemetation may actually exacerbate the latter condition by increasing DHT levels.

The benefits of zinc – at least as far as male pattern hair loss is concerned – seem limited to topical application.

But it would be positive to see more studies conducted on the benefits of topical zinc – especially given the “90% inhibition of 5 alpha-reductase activity” seen in the in vitro study described above.

Until then, though, it’s probably best to stick with tried and tested hair loss treatments!

Check out the forum for the latest hair loss news and success stories!

2 thoughts on “The Links Between Zinc and Hair Loss”