Tyga – the rapper who gave us Rack City and… err… well, that’s about it really – hasn’t always had the low hairline he has nowadays. Yes, just a few short years ago, Tyga’s forehead could be more accurately described as a fivehead. So, how has his hairline un-receded so dramatically? Wig? Weave? Hair transplant? 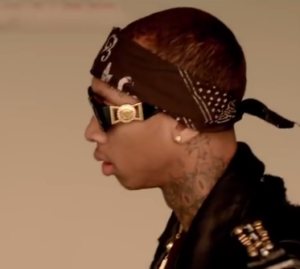 Tyga’s first (and pretty much only) major hit came in the form of 2011’s Rack City.

In the video for the song, Tyga – real name Micheal Ray Stevenson – can be seen sporting a wide range of headgear: bandanas, beanies, snapbacks – you name it.

And given his hairline, that was probably a wise move.

I’m not having a go at him – hair loss is a natural process that affects many men the world over.

But come on, look at the guy! Weak chin, receding hairline – he hardly looks like the tough gangsta he makes himself out to be.

Anyway, here he is pictured at the 2011 BET Awards. Notice how high his hair line is: 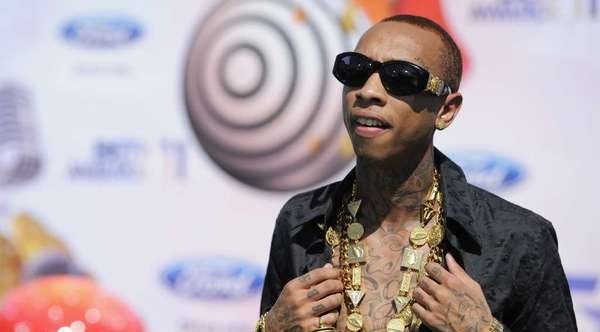 Is Tyga wearing a weave? 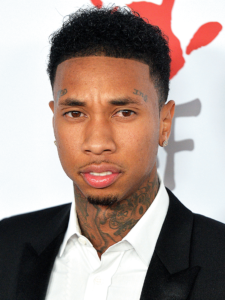 Today, Tyga’s hairline is much lower than it was in 2011.

And he’s dating Kylie Jenner – maybe he asked Kim Kardashian where she got her hair transplant?

But before accusing him of getting a hair transplant, we must look at all the options.

But, at best, they’re mostly only effective for maintaining hair. It’s hugely unlikely they could have lowered Tyga’s hairline by 2 inches!

A more likely explanation is that Tyga is wearing a weave. This video explains how weaves work for men:

But I don’t think this is what’s going on with Tyga’s hair.

But most importantly, there are plenty of photos of Tyga which suggest his new hair is real – as we’ll see. 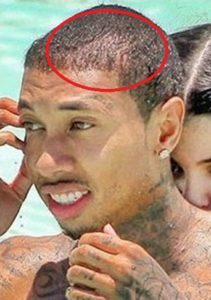 Here, we see Tyga frolicking in the sea with the lovely Kylie.

Today’s technologies mean hair systems – weaves, wigs, etc. – can be worn in water without falling out.

But Tyga’s hair here doesn’t look like a hair system.

You can see his scalp under the hair. His hair is noticeably thinner in this area, but it looks like real hair nonetheless.

No, I think the more likely explanation is that Tyga had a hair transplant. 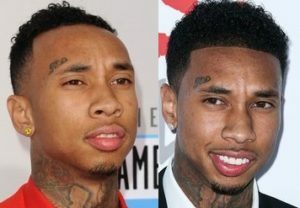 Take a look at Lewis Hamilton’s hair transplant for a similar result.

So until I see Tyga without his hair system, I’m going with hair transplant. His hairline is dramatically lower compared to 2011 and this is the most likely explanation.

Turns out ganstas are concerned about hair loss too!