Propecia (finasteride 1mg) has been around since 1997. It’s the most popular hair loss drug worldwide and is taken by millions of sufferers worldwide. However, it doesn’t have the best reputation, with many users reporting erectile dysfunction and other sexual side effects. Many more are justifiably afraid of using Propecia for fear of suffering the same unwanted effects. Now, though, an alternative method of administering the drug promises to deliver the same benefits without the risks. So is topical finasteride a safer alternative to Propecia?

Propecia was discovered somewhat by accident. Finasteride, the active ingredient, was originally intended as a treatment for Benign prostatic hyperplasia and prescribed in a 5mg daily pill for this purpose. However, doctors soon noticed that users of the drug experienced a fortunate side effect: their hair grew thicker. The drug was then trialled for safety as a hair loss treatment – this time in a 1mg finasteride pill – and approved by the FDA for this purpose in 1997.

expression of the enzyme 5-alpha reductase. This enzyme is known to convert testosterone into the more potent dihydrotestosterone (DHT), the hormone considered to be responsible for hair loss.

Finasteride has been proven in numerous trials to be highly effective at significantly slowing hair loss and in some cases actually reversing it. A commonly cited figure is that around 90% of patients see noticeable improvements in overall density from the drug. There’s no doubt it works, but it’s not without its drawbacks either.

By lowering overall (systemic) levels of DHT, users are likely to notice the effects of low DHT levels elsewhere in their bodies. From watery semen, to reduced desire for sex – even erectile dysfunction in some cases – there are hundreds, if not thousands, of users reporting worrying side effects from Propecia.

If you’re concerned about this issue, find out The Truth About Finasteride Side Effects.

Hair loss sufferers ideally want the effects of low DHT, but only in the affected area (the scalp).

Research chemical RU58841 shows potential for achieving this, but unfortunately is not approved by the FDA. So could finasteride, which is FDA approved, achieve the same results?

The theory is that topically applied finasteride could be absorbed by the scalp, thus preventing the effects of DHT locally, with minimal absorption into the rest of the body.

And various trials appear to suggest it works.

And as for side effects, this trial found:

“We present herein the results of a single-blind, placebo-controlled, 16-month trial carried out in 52 patients with AA using a 0.005% finasteride solution. The clinical outcome, in terms of both hair regrowth and balding areas reduction, seems to be encouraging, in the absence of either any evidence of percutaneous absorption of finasteride, or local/systemic untoward effects.”

Together these trials suggest topical finasteride shows promise as a hair loss treatment. It appears to effectively slow hair loss with minimal side effects.

And drug manufacturers are taking note. This trial for new hair loss treatment P-3074 contains topical finasteride and claims that:

“It has been proven that P-3074 (a topical solution containing finasteride 0.25%), applied directly on the scalp once a day for seven days, is able to penetrate the scalp skin and to act at the hair bulb level directly, blocking the local DHT more effectively and more consistently than oral finasteride.”

Even Merck, the manufacturer of Propecia, filed a patent for a topical application of their famous hair loss treatment.

So where can I buy topical finasteride?

Unfortunately, finasteride is not as easily available to find in a topical solution as it is in pill form.

However, customers in Canada are able to obtain a prescription for topical finasteride from the hair transplant surgery Hasson & Wong. If you’re based in Europe, it can be bought here.

Alternatively, some hair loss sufferers are taking it upon themselves to create their own topical finasteride solutions. You can find the instructions for how to do this here but we warn that you do so at your own risk.

According to the evidence presented here, yes. 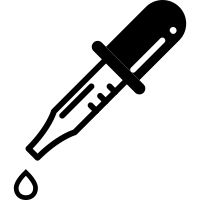 Trials have shown topical finasteride to be an effective hair loss treatment.

And while there have been reports of systemic side effects online, the evidence appears to show that this risk is lower in comparison to oral administration. It’s worth noting, also, that placebo can cause many of the side effects commonly associated with finasteride, so this has to be taken into account as well.

Whether topical finasteride is an effective hair loss treatment or not, it would be good to see further research conducted. Online forums have bought orally administered finasteride side effects to the fore, highlighting the need for an alternative solution for many hair loss sufferers.

Hopefully, this promising treatment will be readily available soon.

Check out the forum to find out the latest on topical finasteride and other future hair loss treatments!