For the longest time, androgenetic alopecia has been thought of as a purely genetic phenomenon. And while there is a strong genetic component to hair loss, new evidence is highlighting the importance of environmental factors. One such factor is diet – particularly sugar consumption. In this post we’ll look at why sugar is especially dangerous for those losing their hair and how reducing sugar intake may slow, or even reverse, hair loss. 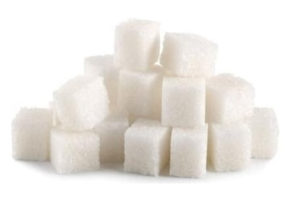 Sugar is linked to a ton of major health issues such as diabetes, heart disease, and cancer.

The average American consumes roughly 82g of sugar a day – more than three times what the World Health Organisation recommends.

But we already knew too much sugar is unhealthy. What’s less well known is the link between sugar and hair loss.

A small but growing body of evidence supports a link between increased sugar consumption and accelerated hair loss.

Our starting point is a (admittedly anecdotal) story of an experiment conducted in 1928. The Bellevue Study saw arctic explorer Karsten Anderson eat a diet of nothing but meat for a whole year:

While this story might not convince you to give up sugary snacks just yet, there is good reason to suspect this observation is more than just coincidence, as we’ll see.

Before getting into the effects of sugar, it’s important to explain the current medical understanding of what causes androgenetic alopecia (pattern hair loss).

Dihydrotestosterone (DHT) is a hormone that’s created when testosterone interacts with an enzyme known as 5 alpha-reductase. DHT plays an important role in male sexual development. But it’s also linked with hair loss.

Drugs that reduce DHT, such as Propecia and dutasteride, have been shown to be effective at slowing and stopping pattern hair loss. Also, individuals born with a genetic deficiency of DHT don’t lose their hair.  These observations have led to the belief that pattern hair loss is entirely due to a genetic sensitivity to DHT.

But there are a number of problems with the hypothesis that DHT is the sole cause of hair loss.

For one, DHT causes hair to grow everywhere else on the body. It also doesn’t explain why hair is only lost from the top of the head, or why some men have high levels of DHT but don’t lose their hair.

Further, men with pattern hair loss are more likely to suffer from heart disease, prostate cancer, and insulin resistance (more on this later). Bald men’s scalps also have four times as many collagen bundles compared to non-bald scalps. This all suggests that pattern hair loss is more than simply genetic sensitivity to DHT.

But there is no denying some genetic component to androgenetic alopecia. And DHT is clearly implicated somehow. However, new evidence suggests that environmental factors – particularly diet – also play an important role as well.

Insulin is a crucial hormone that, among other things, promotes the absorption of sugar (glucose) into the body’s cells.

When someone develops insulin resistance, though, cells no longer respond in the normal way to insulin. Glucose is no longer absorbed as effectively and the body then has to produce more insulin to achieve the same effect. Left unchecked, this can develop into type 2 diabetes.

So what has this got to do with hair loss?

Multiple studies1,2,3,4 have observed that men who lose their hair at a young age are significantly more likely to develop insulin resistance.

“Our practice-based case-control study in men aged 19–50 years showed a strikingly increased risk of hyperinsulinaemia and insulin-resistance-associated disorders such as obesity, hypertension, and dislipidaemia in men with early onset of alopecia (<35), compared with age-matched controls. This finding supports the hypothesis that early androgenetic alopecia could be a clinical marker of insulin resistance.”

Excess sugar appears to be significantly more harmful to bald and balding men – especially if hair loss begins at a young age. For some reason, men with a full head of hair are better able to deal with sugary foods and are less likely to develop insulin resistance.

The good news is that insulin resistance can be controlled and even reversed with dietary intervention.

So, even if your genetics make you more vulnerable to insulin resistance, you can mitigate the effects of these genes with a suitable diet. In other words, it’s within your power to control.

But does sugar actually cause hair loss?

Given the increased likelihood of developing insulin resistance and type 2 diabetes, bald and balding men can improve their health by restricting sugar intake.

But will cutting down on sugar actually stop hair loss?

Unfortunately, there is surprisingly little research that specifically addresses this question. It would be interesting to see, for example, the effects of high sugar vs. low sugar diets on two twins genetically predisposed to hair loss.

However, there are two theoretical reasons why reducing sugar intake might stop hair loss.

Sex hormone-binding globulin (SHBG) is a glycoprotein that binds to sex hormones such as estrogen, testosterone, and DHT. Interestingly, the binding affinity of SHBG is strongest with DHT.

Essentially, what this boils down to is higher SHBG = lower DHT.

This is where sugar comes in. We’ve seen that eating sugar causes insulin to be released. And levels of insulin have been shown to be inversely correlated with SHBG:

“As SHBG is not known to alter the production or metabolism of insulin, whereas insulin has been shown in vitro to decrease the synthesis of SHBG, it seems a reasonable conclusion that the predictable inverse relationship between serum insulin and SHBG indicates that insulin controls SHBG synthesis in vivo.”

So, it follows that eating sugar can effectively increase DHT, which can lead to accelerated hair loss.

If you’re losing your hair, do you notice that your scalp is often itchy or red?

This is a common complaint among individuals with pattern hair loss. And the most likely explanation is that this is a consequence of inflammation.

The exact role of inflammation in hair loss is controversial. But various studies1,2,3 have observed a correlation between baldness and inflammation.

“Studies suggest that inflammation is a feature in [male androgenetic alopecia] even though its significance in the pathogenesis of the disease is controversial. […] A considerable difference in the inflammatory infiltrate has been observed between balding and non-balding scalp […] A modest degree of chronic inflammation around the upper part of hair follicles has been well described by many investigators […] The possibility of a slow inflammatory scarring process has been suggested by the irreversibility of the hair loss“

This last sentence is particularly interesting as it may explain why bald scalps have significantly higher levels of fibrosis (scar tissue) compared to controls. This would also explain why it is so difficult to reverse pattern hair loss and regrow lost hair.

Inflammation is known to be key to autoimmune hair loss disorders like alopecia areata. Drugs that control this inflammation – such as JAK inhibitors – also control the hair loss. But these studies suggest chronic inflammation plays a role in the more common androgenetic alopecia as well.

A high sugar, ‘western’, diet has been implicated by various studies1,2,3,4 as a cause of chronic inflammation. And reducing glycemic load (i.e. the amount by which diet increases blood sugar levels) has been shown to also reduce chronic inflammation and insulin resistance:

“Diets low in glycemic index/load or high in whole grain products have been associated with decreased concentrations of inflammatory markers […] These associations appear to be independent of body weight, glycemic control, and other cardiovascular risk factors. The protective effects of low glycemic load and high whole grains on systemic inflammation may be explained, in part, by reduction in hyperglycemia-induced overproduction of oxidative stress and by amelioration in insulin resistance, adiposity, dyslipidemia, and hypertension.”

So, reducing glycemic load reduces inflammation. And if, as many suspect, inflammation plays an important role in hair loss, then reducing sugar intake may also improve hair too.

How to control blood sugar and prevent hair loss

Unsurprisingly, the key to controlling blood sugar is diet.

Another weapon in the fight against high blood sugar is exercise.

Finally, there is evidence that certain health supplements may be effective at controlling blood sugar levels.

Biotin is often regarded as the hair loss vitamin. Advocates point out that this B vitamin is key for the formation of keratin – the key structural component of hair.

But biotin has also been shown to improve blood sugar regulation. Could this be the real reason why it’s an effective hair loss treatment?

Evidence continues to pile up that pattern hair loss is more than simply a cosmetic issue.

The links between pattern hair loss and conditions such as heart disease and prostate cancer are too strong and too well established to be dismissed as pure coincidence. Insulin resistance is another such condition and it means excess sugar is particularly unhealthy for those losing their hair.

This is not to say that sugar is the cause of hair loss, though. I’m sure you can think of sugar addicts with full heads of hair. Or bald people who eat very little sugar.

But if you’re genetically predisposed to androgenetic alopecia, it appears that excess sugar can exacerbate and accelerate the progression of hair loss by increasing inflammation and interfering with hormones insulin and DHT.

The positive spin on these findings is that it means hair loss is controllable – at least to some extent.

Pattern hair loss has for a long time been thought of as a condition determined entirely by genetics. But these findings suggest a way to take a degree of control over this condition, improving both hair and overall health.

Have you reversed your hair loss by changing your diet? Questions about sugar and hair loss? Join the discussion in the forum!

1 thought on “How Excess Sugar Can Accelerate Hair Loss”