It’s one of the most bizarre hair lines in the world. 80s action star and martial artist Steven Seagal was once heavily balding. Yet at some point in the early 90s his hair magically returned. And since then, it’s just got weirder and weirder. Just what exactly is going on with Steven Seagal’s hair?

Seagal is just about the only guy who could challenge Donald Trump for the title of world’s weirdest hair.

And like Trump, it’s a bit of a mystery what exactly is going on with it.

One thing we do know for sure: Steven Seagal was heavily balding during the 1980s. 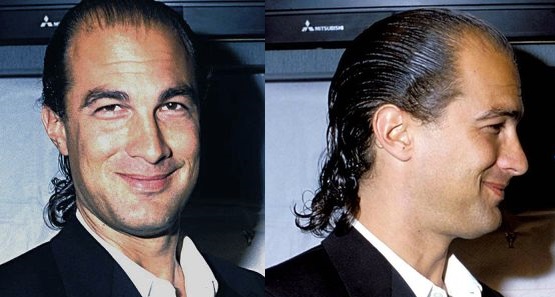 He started his film career as a stuntman before making his on-screen acting debut in 1988’s Above the Law. 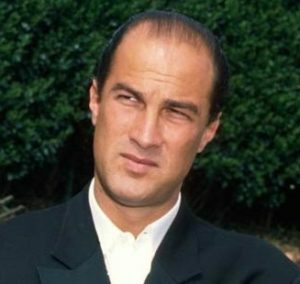 But even with Hollywood hair and makeup, you can tell the guy is heavily receding.

And pictures from around this time confirm. Steven Seagal was pretty much bald in the late 80s.

Yet by the time his next film came around, 1991’s Hard to Kill, his hair was noticeably thicker.

One explanation for this is that he was using concealer. 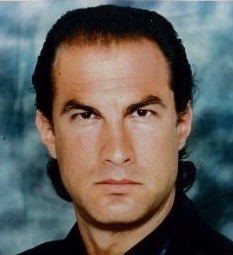 Hair loss concealer products are essentially dark fibers you shake onto your hair to make it look thicker. And they can be surprisingly effective at creating the illusion of a full head of hair.

However, too much concealer can look pretty unnatural close up. On the one hand, hair looks really dark, suggesting a thick head of hair. On the other, the hair lacks any real density.

My guess is Hollywood introduced Seagal to concealers but then he went and took it a bit too far! 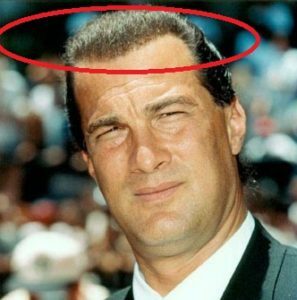 Seagal’s hair appears to have changed again at some point during the 90s.

The hair line is bulked up a fair bit – but it doesn’t quite look natural.

Take a look at this hair transplant gone wrong for an idea of what I mean:

Of course, Seagal’s hair isn’t quite that bad. But the look is similar: thick clumps of hair separated by bald scalp. It just doesn’t look natural.

But Steven Seagal’s hair gets even weirder…

Despite taking it easy on the concealer post hair transplant, Seagal slowly started using it more and more until, eventually, he looked like this: 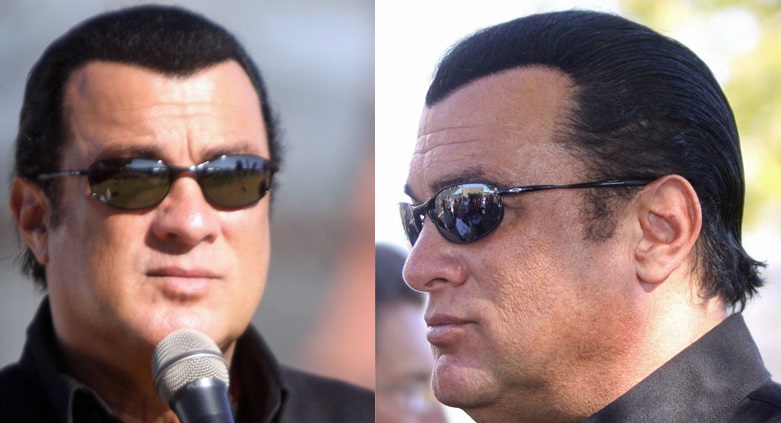 That is not a natural look.

His hair is waaaaay too dark. In fact, it doesn’t look like hair at all.

It looks more like someone has grabbed a paintbrush and some extra-dark black paint and painted straight onto his scalp.

But if you think that’s weird, you ain’t seen nothing yet. Just look at the way he runs!

But yeah, there’s definitely something going on with his hair.

And it surely can’t be a wig because, well, who on earth makes wigs like that?!