Hollywood funnyman Steve Carell: actor, director, writer, producer, and… hair transplant patient? He’s appeared in plenty of big films over the years but he’s perhaps best known for his role as Michael Scott – regional manager at Dunder Mifflin in NBC’s The Office. But in the first series of this hit sitcom, Steve Carell was very noticeably balding. So how did he regain his hair? 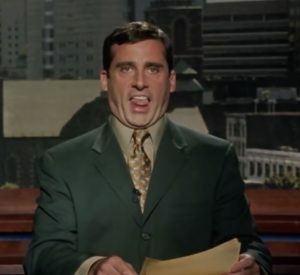 If you’ve seen it, you’ll no doubt remember the scene where his character, Evan Baxter, goes crazy live on air. In a deleted cut of this bit, his hair actually catches on fire.

But apart from that, he’s got a pretty good head of hair! It’s brushed forward slightly so it’s hard to make out the hairline, but you wouldn’t say that Steve Carell was losing his hair at all. 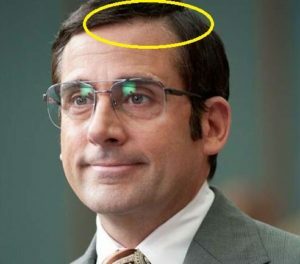 Next came Anchorman in 2004. Brick Tamland’s hair is kind of brushed forward in the same way, but in a few shots you can make out Steve Carell’s hairline.

And it’s not bad!

However, you can make out some slight miniaturisation at the left temple. But then, he was 42 at the time – perfectly normal!

So where do the Steve Carell hair transplant rumors come from?

The Office first appeared on our screens in 2005. Carell played the lead role of regional manager Michael Scott – a character with a bit of a hair loss problem.

At least in the first series, anyway.

By season 2, though, Steve Carell’s hair had magically reappeared.

So how did Steve Carell regain his hair after season 1 of The Office?

Was it a hair transplant?

While it’s true that men who’ve lost their hair don’t just suddenly regrow it in a matter of months (even with the best hair loss treatments), I don’t think Steve Carell got a hair transplant.

So, what was it? Concealer? Wig? Makeup?

Well, yes – makeup. But the makeup didn’t give Steve Carell more hair, it took it away!

In the first series of The Office, Michael Scott was intended as a more villanous character than he turned out to be. I’m guessing the makeup artists decided to give him the look of hair loss to accentuate this. 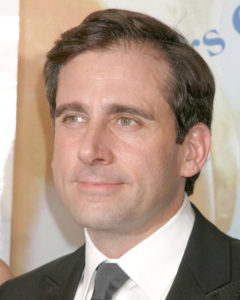 Here he is in 2006 with his natural hair. The (perfectly normal!) miniaturisation at the left temple is still there, but he’s got far more hair than the Michael Scott character!

I know, I know – I’m always saying how many celebrities are getting hair transplants. And Steve Carell could obviously afford one being a famous actor. Also, today’s best hair transplant procedures can look completely natural and undetectable.

But Steve Carell’s natural hair is pretty good. Very slight thinning, perhaps, but not enough to prevent him from landing the kinds of roles he plays.

Plus, the temporal recession is still there, even in 2016. If Steve Carell did get a hair transplant, surely he’d have got that fixed?