Last month (July 2016) saw California-based biotech company Samumed complete its phase 2 trials for hair loss treatment SM04554. Although the results have yet to be made public, the company gave us an idea of how effective it is in its presentation to the American Academy of Dermatology in March. So, is it the ultimate cure for baldness? Or another disappointing failure? Let’s take a look.

It is applied topically to the scalp – like minoxidil – but works by selectively activating and deactivating WNT signalling pathways.

If you’re really observant, you may remember that WNT was mentioned in the article on using a derma roller for hair loss. It has been suggested that the wound response induced by a derma roller leads to an activation of this WNT pathway.

This is all pretty new science though. WNT pathways are incredibly complex and involved in various other processes besides hair loss. Not much is known yet about the relationship between the WNT pathway and male pattern hair loss.

But this is how SM04554 works, supposedly. It activates and deactivates various WNT pathways related to hair growth. And this angle is completely different to how any of the current hair loss treatments work.

Finasteride, for example, works by lowering dihydrotestosterone (DHT) levels. For a long time, DHT has been considered the primary cause of male pattern baldness. And while it certainly plays a part, new developments suggest the story is more complex than this.

New treatments – like SM04554 – should allow hair loss sufferers to attack the problem from various different angles besides DHT. This is likely to have a synergistic effect, improving hair regrowth and maintenance. It also provides an alternative to people who suffer side effects from DHT inhibitors.

But enough about that! Does it actually work?!

The following is an extract from a Samumed press release: 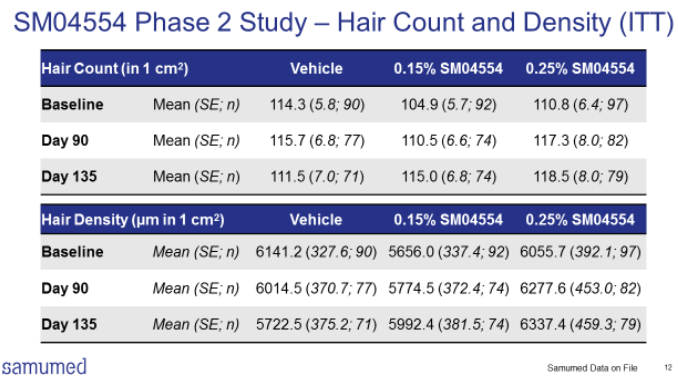 So, not exactly a miracle cure, but promising results nonetheless. Subjects treated with SM04554 saw increased hair count and density.

It’s also worth mentioning that all participants in the study were at least Norwood stage 4 – so at an advanced stage of hair loss. This suggests Samumed see this as a treatment to actually reverse hair loss, not simply maintain it.

And 90 days isn’t a long time. It’s only 3 months, and hair continued to improve even after stopping SM04554 treatment.

What’s more, SM04554 looks unlikely to cause negative side effects:

“SM04554 appeared to be safe and well-tolerated. There were no serious adverse events (SAE) observed in the treatment groups, and the incidence of adverse events (AE) was similar between treatment and control groups.”

All in all, these initial results provide reason for cautious optimism. 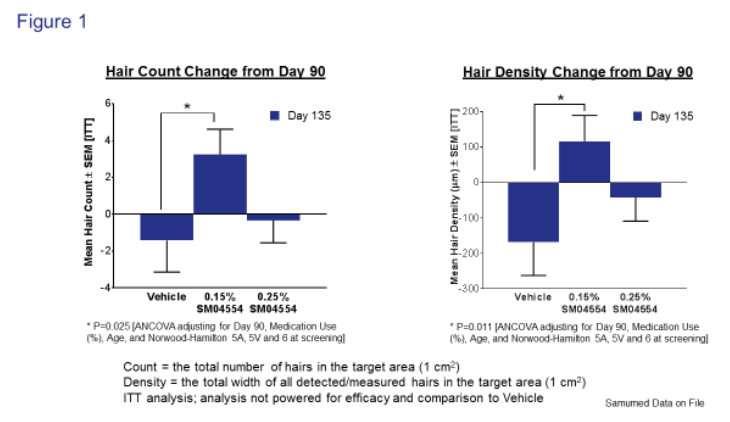 Given the promise shown in these initial results, I’d hope Samumed decide to take SM04554 into phase 3 trials.

But phase 3 is likely to take at least 18 months. And even then, there are likely to be further hoops to jump through before SM04554 actually makes it to market.

But during this time it’s possible Samumed could further refine SM04554, leading to even better results than we’ve already seen.

It would also be interesting to see how effective SM04554 is when taken for a longer time period than 3 months. Perhaps subjects’ hair count would increase by a further 10% if taken for another 90 days? What would happen after a year?

What’s most exciting about this drug is its potential to actually regrow hair on those who are already significantly bald. It may not be a miracle hair loss cure, but it’s a step in the right direction. Let’s hope for more positive news soon.

Interested in future hair loss treatments? Another potential drug that’s just finished phase 2 trials is CB0301. You can find out more about it here.