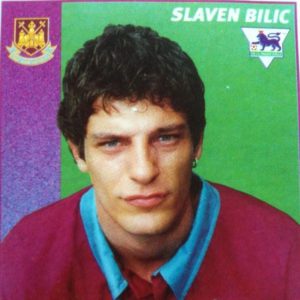 Bilic’s first experience of the premier league came in 1996 when he was signed to play for West Ham United.

After a season at West Ham and a brief spell at Everton, his playing career ended in 1999.

Since hanging up his boots, Slav has become better known as a manager of various teams. Currently, he’s manager of West Ham United – the club he formerly played for. 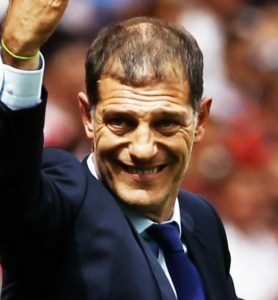 But the stress of managing a premier league club started to show – and Slaven Bilic’s hair became noticeably thinner than in his playing days.

OK, that’s not necessarily accurate: despite the myth, it’s not necessarily stress that causes hair loss.  Currently, doctors link male hair loss with DHT – a hormone related to testosterone. DHT is believed to bind to hair follicles, causing them to shrink and stop producing hair.

And it seems this is what happened to Slaven Bilic. By 2015, he was displaying obvious signs of male pattern hair loss.

So, what do premier league footballers and managers do when their hair falls out? They get hair transplants of course! 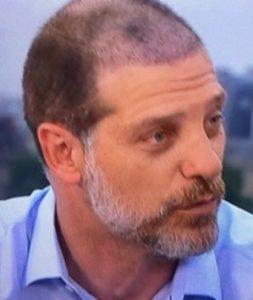 Normally at Celeb Hair Transplants, we’re reluctant to say with certainty whether a celebrity has had a hair transplant.

Unless a celebrity openly admits to it, like Wayne Rooney, it’s always possible they’ve used something else to regrow their hair (even if it is unlikely).

But Slaven Bilic’s scalp during the Euro 2016 coverage leaves little room for doubt.

I mean, it’s still very noticeably red! Not only that, the outline is very clearly that of his new hairline.

After about 3 months though, the hair transplant starts to grow in. However, it’s not until around 18 months post surgery that the full result will be visible.

Given how his scalp looked during Euro 2016, it seems safe to say Slaven Bilic had a hair transplant in May/June of 2016.

So, how does it look now?

Well, despite the disappointing news that Dimitri Payet no longer wants to play for the club, Slaven Bilic’s hair transplant transformation has been anything but disappointing.

The bald and sore looking scalp of Euro 2016 has been replaced with a flat hairline. The receded temples are no more.

However, a hair transplant doesn’t stop your existing hair from continuing to fall out.

And judging by the pattern of Slav’s hair loss, he’s got more to come. Although the newly transplanted hair should last a lifetime, it seems likely that his hair loss will continue behind the hair transplant.

For now, though, it’s a big improvement. I bet he wishes reversing West Ham’s fortunes was as easy as reversing his hair loss!