It sounds perfect: a product you apply to your scalp that addresses the root cause of baldness – without causing any side effects! That’s what research chemical RU58841 appears to do, in theory. By combatting the damaging effects of hair loss-causing hormones locally, this topical antiandrogen should be able to maintain the hair of men (and women) who are susceptible to androgenetic alopecia. So is RU58841 the ultimate hair loss treatment?

RU58841 is an experimental compound which has been clinically trialled for androgenetic alopecia (typical male pattern baldness) and various other androgen-related conditions such as hirsutism and acne. When applied topically, it prevents the hormone dihydrotestosterone (DHT) from binding to the androgen receptor.

DHT is considered to be the primary cause of male pattern baldness.

DHT binds to hair follicles. Over time, this causes them to shrink. Eventually, they stop producing hair.

Though recent studies suggest other factors might be equally, or more, important, numerous studies have proved a strong connection between DHT and hair loss in individuals whose follicles are susceptible to miniaturisation.

But RU58841 prevents the effects of DHT on the hair, potentially halting or reversing hair loss.

There is strong evidence in medical literature that RU58841 is a highly potent inhibitor of DHT.

This study on the macaque model of androgenetic alopecia, for example, found the following:

“RU58841, on topical application, revealed a potent increase in density, thickening, and length of hair in the macaque model of androgenetic alopecia, whereas no systemic effects were detected.”

What good is that to me? I’m not a monkey!

Well, this study on humans found:

As well as these trials, various posters on hair loss forums have experimented with the compound on themselves, with varying results.

While the sum of these anecdotal reports doesn’t constitute the most rigorous of scientific studies, they do tend to support the theory behind RU58841.

This thread, for example, appears to show significant hair regrowth from the compound.

What are the side effects?

RU58841 is a topical solution that acts locally on the area it is applied.

By preventing DHT from acting on hair follicles, it should allow users to maintain their hair without modifying their hormonal profile.

This is in contrast to finasteride, an FDA approved hair loss treatment, which works by reducing DHT levels systemically. The finasteride pill reduces levels of the enzyme 5-alpha reductase throughout the body, preventing testosterone from converting to DHT.

Finasteride (1mg) lowers overall levels of DHT by around 70%. The problem with this, though, is that DHT does a lot more than simply cause hair loss. DHT is an important male hormone, especially for male sexual development during puberty. As a result of this, some men will experience side effects when taking finasteride.

RU58841 is not approved by the FDA to treat hair loss (or any conditions currently).

But, in theory, it should be safer than finasteride. By acting only on the affected area (the scalp) users could enjoy the hair growth benefits of low DHT without experiencing any of the sexual side effects.

What’s more, the half life of RU58841 is only around 1 hour, meaning if it is absorbed into the system it won’t be around for long. For comparison, finasteride has a half life of around 6 hours.

Despite it being safe in theory, users who have experimented on themselves with RU58841 have reported side effects including:

The accuracy of these reports is difficult to determine however. As users have had to mix their own RU58841 solutions – using chemicals from untested sources – it’s difficult to get an accurate picture of the side effect profile of the drug. What’s more, many of these users will have been using other experimental treatments concurrently, further muddying the waters.

With such a small and uncontrolled sample, using RU58841 to prevent or reverse hair loss is a risk I would not endorse.

Where can I buy it?

As it is not currently FDA approved for any medical uses, you can’t buy RU58841 from any pharmacy or get a prescription from your doctor.

However, it is possible to acquire RU58841 for research purposes.

But suppliers clearly indicate that RU58841 is not intended for use on humans.

And it’s not just a matter of buying the compound and sticking it on your scalp either: 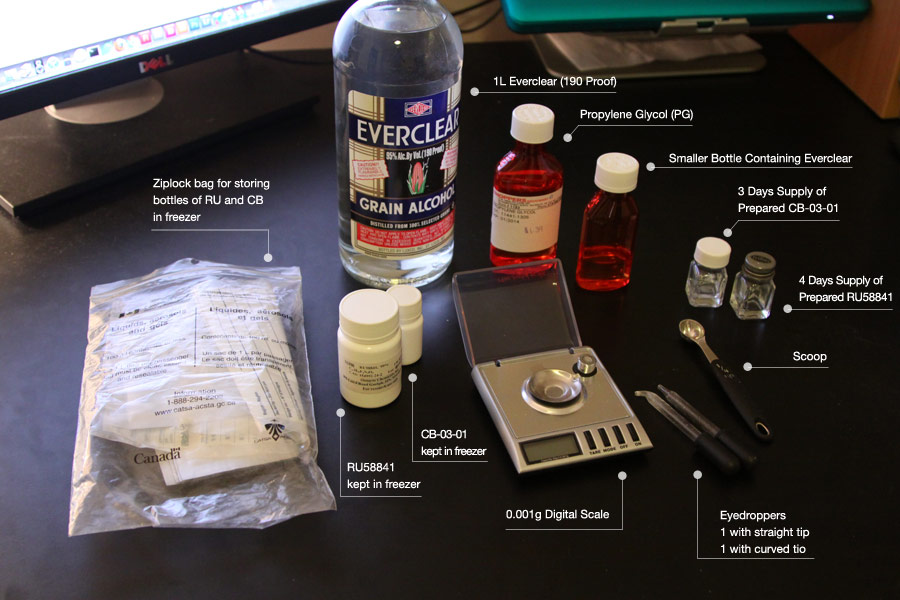 This detailed guide shows you everything you need to acquire along with how to use it. But even if you follow these instructions to the letter, the quality, dosage, and efficacy of this product can’t be guaranteed.

Using the maximum dosage of 100mg per day, as suggested by this guide, this will give you 50 applications, which works out at about $54 a month.

This doesn’t include the cost of the other components you’ll need such as a vehicle for RU58841, scales, etc.

Of course, you might use a lower dosage or apply the solution every other day, in which case the cost will be lower.

As the product hasn’t been approved for hair loss, there is no ‘right’ dosage. This makes it difficult to give an exact cost of RU58841.

Should I use it?

For one, RU58841 has not been thoroughly tested.

The fact that it isn’t approved for any medical applications means would-be users will have to assemble the ingredients and manufacture the product themselves. This is less than ideal, as users are unlikely to have access to the equipment, resources, and knowledge that a drugs lab would to ensure a safe and reliable product.

And as the product is a ‘research chemical’ not intended for use on humans, there’s no guarantee that vendors are selling pure RU58841 – or even that what you buy is RU58841 at all!

Despite studies showing promise in preventing or even reversing hair loss, RU58841 is not currently being trialled as a potential treatment for male pattern hair loss. It’s a shame there has been so little research into this drug even though it was discovered more than 20 years ago.

The anti-androgenic capabilities of RU58841 suggest it would be a highly effective hair loss treatment. So much so, in fact, that hair loss sufferers are taking it upon themselves to test the compound, potentially putting their health at risk.