For years, there have been anecdotal reports that essential oils – like those derived from rosemary – can have a positive effect on male pattern hair loss. Now, it looks like the evidence backs this up. A recent study tested both rosemary oil and minoxidil for hair loss – and found them to be equally effective. So, just how good is rosemary oil for hair loss? 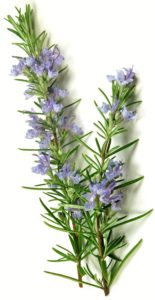 Rosmarinus officinalis, more commonly known as rosemary, is a fragrant herb with needles and white, pink, blue, or purple flowers. It’s native to the Mediterranean, and is rich in antioxidants.

For years, it’s been used as flavoring in foods, as a fragrance in perfume, and even as medicine. Now, it seems it may be useful for fighting androgenetic alopecia (male pattern hair loss) as well.

In 1988, minoxidil became the first treatment approved by the FDA to treat hair loss. This is a big deal, as only one other treatment – finasteride – has so far been approved for this purpose. It’s a proven hair loss treatment so it would be impressive if a natural alternative could match its effectiveness.

Subjects in the trial were randomly assigned either rosemary oil or a 2% minoxidil solution. They would gently massage 1mL of each solution into the scalp twice daily at approximately 12 hour intervals.

At 3 and 6 months into treatment, subjects’ hair counts were assessed by standardized microphotographic assessment. The results were:

So not only did the rosemary oil lead to a “significant increase” in hair count after 6 months, it was no less effective than 2% minoxidil.

This strongly suggests that rosemary oil is an effective hair loss treatment.

The writers of the study propose various mechanisms of action through which rosemary oil alleviates hair loss.

First, the “spasmolytic activity on smooth muscles” from rosemary may improve blood flow to hair follicles. The high concentration of camphor found in rosemary may account for this effect, as it is known to have this effect when applied locally.

Interestingly, minoxidil is known to have a similar effect. However, this is not believed to be why it works for hair loss.

Another possible reason why rosemary oil works for hair loss is that it is rich in antioxidants. According to the study, “lower levels of antioxidants and elevated oxidants have been found in patients with alopecia.”

So it may be that rosemary oil has a positive impact on oxidants in the scalp, creating an environment similar to those who do not suffer from hair loss.

Rosemary oil is also known to have antibacterial and antifungal properties. This, too, is suggested as a possible reason for its effectiveness.

Finally, it is worth mentioning that perhaps the way both the minoxidil and rosemary oil were administered – scalp massage – had a positive impact on both groups. Although not mentioned in the study, there is strong evidence that scalp massage can lead to a significant cosmetic improvement for hair loss. For more details, check out this article.

Is rosemary oil for hair loss a miracle cure?

Let’s not get carried away!

Although this trial suggests rosemary oil is indeed effective, it is by no means a miracle hair loss cure.

The before and after photo below does show some regrowth, but it’s not a major difference.

And the comparison – 2% minoxidil – is not the toughest competition. 5% minoxidil is known to be more effective for hair loss.

But the results are positive nonetheless.

For one, it provides an effective alternative therapy for those who – for whatever reason – are unable to take minoxidil. Minoxidil is relatively safe, but can lead to side effects such as:

And while the side effects from minoxidil are minimal, they seem even less likely with rosemary oil.

As mentioned, rosemary oil led to less scalp itching. From my own personal experience, this was a big drawback with minoxidil.

But by itself, rosemary oil is unlikely to have a huge effect on hair loss. If you do decide to try it out, it’s best to use it in conjunction with proven hair loss treatments for maximum results.

If nothing else, though, what this trial proves is that natural hair loss treatments can indeed be effective.

Going forward, it would be positive to see further research into rosemary oil – and other natural hair loss treatments such as pumpkin seed oil and saw palmetto – to confirm their effectiveness.

Have you tried rosemary oil for hair loss? What is your view on natural hair loss treatments? Let us know in the forum!