Bodybuilder Rich Piana has become a YouTube sensation with his enormous physique and total honesty about the world of bodybuilding. From steroid cycles to eating 12+ meals a day, Rich has made a name for himself online by detailing exactly what it takes to get to his size. One thing he’s been less candid about though is his hair. With the amount of gear he’s taken, it’s lucky he’s got any left – and photos from a few years ago show he had some pretty advanced hair loss. So how did he regain a full head of hair?

Before starting his own company, 5%, Rich Piana was sponsored by Mutant supplements.

The company’s slogan is “leave humanity behind” and Rich has certainly done that. Unfortunately, in doing so, he also appears to have left his hair behind as well.

Just take a look at this video from around 2012 when he was still endorsing their products:

Despite having very sparse density on his scalp – Rich looks to be around a Norwood 4 in this video – he still has the shadow of a low hairline.

It’s quite an unusual look (even for a mutant) and points to him having had some work done.

This picture illustrates what a scalp will typically look like a month or so after getting a hair transplant.

The newly transplanted hair has fallen out but the recipient area has still not fully recovered, creating a contrast in colour between the red hairline and forehead.

For another view of his pre-transplant hair, take a look at it in this discussion with Ric Drasin:

Rich had clearly lost a lot of his hair when this video was filmed.

If I had to guess how much of his original hair he’s got left, I’d say 5%.

Although taking a look at his steroid cycle, it’s a miracle there’s anything left at all!

Some bodybuilders can take steroids without it causing hair loss. For those whose hair is genetically resistant to the damaging effects of the hormone dihydrotestosterone (DHT) – the main hormone responsible for hair loss – their hair will remain no matter how much gear they take.

Rich does not appear to be one of these lucky people.

Not only that, he’s taking anadrol, tren and dianabol – three compounds known to be particularly damaging to the hair.

In recent videos though, Rich has regained his youthful hairline along with a lot of the density.

Despite still taking steroids like they’re going out of fashion, the super mutant has a head of hair better than a lot of men his age.

So has Rich Piana had a hair transplant?

For one, he’s no stranger to doing whatever it takes to achieve results.

He’s done all sorts of things to modify his appearance. Besides the steroid use, there’s his tattoos, dermal implants, synthol – the list goes on.

Still not convinced? Take a look at this screenshot from one of his videos.

As described in this article on getting a hair transplant in Turkey, a certain kind of hair transplant operation, Follicular Unit Transplantation (FUT), will leave a distinctive scar at the back of the head.

This scar is formed when a strip of scalp is taken from the donor area to harvest hair follicles for transplantation into the recipient area.

Despite having relatively long hair on the sides of his head, you can see just such a scar in a lot of Rich’s videos. 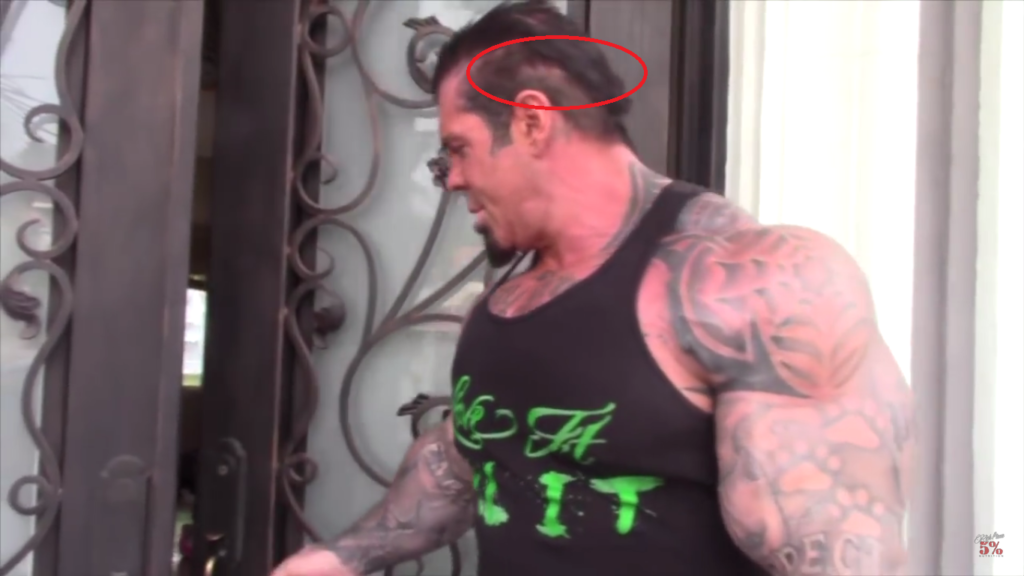 Even the strongest hair loss solutions currently available are unlikely to have caused Rich to pretty much regrow a full head of hair – especially when he’s injecting enormous quantities of androgenic compounds on a daily basis.

I’m a huge Rich Piana fan and I have massive respect for the way he tells it like it is.

So Rich, if you ever read this, please make a video addressing this topic in your famously truthful way!