Since the discovery in 2012 of a link between androgenetic alopecia (male pattern hair loss) and PGD2, the race has been on to find a hair loss cure based on this discovery. Big pharma is currently trialling a range of PGD2-based hair loss treatments. But many natural products that may reduce PGD2 already exist. One of them is resveratrol – but is it effective for treating hair loss?

If you’ve seen one of the many headlines touting the health benefits of red wine, you may have heard of resveratrol. 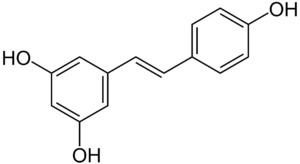 Resveratrol is a polyphenol – a group of organic compounds that are thought to have numerous health benefits.

And resveratrol is found (amongst other places) in the skin of red grapes. Since red wine is made from red grapes, it too contains this wonder ingredient.

And if the headlines are to be believed, it really is a wonder ingredient! A broad range of health benefits are said to accompany resveratrol consumption, from reduced risk of cancer to increased lifespan.

Of course, what we’re concerned about is whether resveratrol works for hair loss. Specifically, androgenetic alopecia, or typical male pattern hair loss.

Recent findings have revealed that male pattern baldness may be more than just a cosmetic issue. Men who go bald – especially at a young age – are more likely to suffer from heart disease and insulin sensitivity issues1,2,3.

Now, it may just be coincidence, but resveratrol appears to be effective at treating both of these conditions.

For example, it has been observed that moderate red wine consumption is associated with reduced risk of heart disease. This so-called ‘French paradox’ is explained by the high levels of resveratrol found in red wine1,2,3.

Furthermore, resveratrol has been demonstrated to significantly improve insulin sensitivity in people with diabetes. If you’ve read our article on the links between diet, insulin, and hair loss, you’ll know of the important links between blood sugar, insulin, diabetes, and hair loss. Resveratrol, if it improves insulin sensitivity, may therefore be an effective hair loss treatment.

The cause of hair loss

As you may already know, the current medical understanding of hair loss is that it is caused by DHT.

DHT, or dihydrotestosterone, is a hormone formed when testosterone interacts with 5-alpha reductase. It is claimed that DHT binds to hair follicles and that this is what causes them to shrink. Eventually, follicles get so small that they no longer produce visible hair.

But there are a number of problems with this explanation. And in 2012, a potentially more accurate cause of hair loss was proposed: prostaglandin D2 (PGD2).

Given the strong links between PGD2 and male pattern hair loss, many hair loss treatments currently in development are looking at ways to reduce it in the scalp.

And there are studies which suggest resveratrol may have the effect of lowering PGD2 levels.

“Resveratrol at low concentrations (≤ 10 μM) inhibited PGD2 biosynthesis but not degranulation. Accordingly, COX-2 expression was inhibited […] These findings suggest that Resveratrol as a therapeutic agent could inhibit PGD2-mediated inflammation.”

Another study, this one from 2016, also observed PGD2 inhibition from resveratrol.

Whilst neither of these resveratrol studies examined its effects on hair loss specifically, they both have a common finding: resveratrol reduces PGD2. If PGD2 is an important cause of hair loss, then it stands to reason that resveratrol may be an effective treatment for the management of androgenetic alopecia.

Unfortunately, there are no trials that specifically test the efficacy of resveratrol for hair loss.

However, the following facts suggest resveratrol may be an effective treatment for androgenetic alopecia (AA):

When looked at together, these observations seem more than just coincidence.

Unfortunately, there just isn’t enough evidence to say with certainty whether resveratrol is an effective hair loss treatment.

Yes, it does appear to reduce PGD2. However, other studies suggest it reduces PGE2 as well.

PGD2 is inflammatory, PGE2 is anti-inflammatory. One appears to be beneficial for hair. The other appears to be harmful to it. So, if resveratrol blocks both PGD2 and PGE2, it suffers the same drawbacks as aspirin for hair loss: it reduces both.

It seems, at least as far as hair loss is concerned, the balance between prostaglandins is more important than the overall levels.

And while there is some reason to suggest resveratrol may lead to a more favorable balance, the jury is still out.

Visit the forum to see what people are saying about natural hair loss treatments like resveratrol!