In case you’re wondering what the image above is all about, it’s a figure from a recent hair loss study with exciting results. The research suggests that plucking hair in a specific pattern can make more grow – a finding that could lead to a cure for androgenetic alopecia. It’s a bit more complicated than just randomly pulling hairs, though. So before you reach for the tweezers, here’s the latest on this exciting new science. 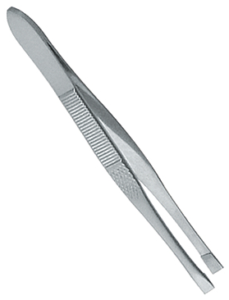 In the study, Organ-level quorum sensing directs regeneration in hair stem cell populations, 200 hairs were plucked from the back of a mouse in various different configurations.

When plucked hairs were sparsely spread out, they did not regrow. But when hairs were plucked densely from an area 5 millimeters in diameter, the hair regenerated. Not only that, new hair grew outside the plucked area as well.

In some tests, the team managed to regenerate 1300 hairs by plucking 200.

But more hair plucking didn’t necessarily mean more hair. A higher-density pluck – 200 hairs from a 4 millimeter area – led to 780 new hairs. When every hair was pulled out, the hair grew back but did not lead to any extra regeneration.

This isn’t the first time a connection between light injury to the scalp and hair regrowth has been suggested, either. We recently discussed how using a derma roller – a device that causes microscopic wounds to the scalp – can lead to increased hair growth. To find out more, click here.

“Plucking hair at different densities leads to a regeneration of up to five times more neighboring, unplucked resting hairs, indicating activation of a collective decision-making process.”

Scientists have long known that some injuries lead to regeneration, and others don’t.

In the case of hair, it was demonstrated that damage to a single hair was insufficient to invoke a healing response. But if enough hairs were damaged, regeneration occurred.

According to the researchers, this response is explained by a phenomenon known as quorum sensing.

Quorum sensing is a system of stimuli used to coordinate many systems in nature – from gene expression in bacteria to the nesting behavior of social insects.

In the case of hair, a plucked hair releases a signal. Surrounding hairs also have receptors which can detect this signal. If a certain threshold of these signals is exceeded, the regeneration response is triggered and new hair grows.

When researchers plucked 200 hairs from a 5 millimeter area, it led to significant hair regeneration, as seen in the magnified photo below:

This regeneration response also extended to surrounding areas, with new hairs popping up outside the 5mm area from which hairs were plucked.

Could quorum sensing lead to a hair loss cure?

Despite these exciting results, don’t go reaching for the tweezers just yet.

For one, the study was conducted on a mouse, not a human.

And even if the same response does occur in humans – which does seem likely – it’s unclear what the optimal plucking density for hair regrowth would be.

But its another discovery that could potentially lead to a hair loss cure, which can only be a good thing.

Rather than focusing exclusively on dihydrotestosterone (DHT), we’re seeing more and more avenues being explored. From PGD2 to WNT signalling pathways, new research means the hair loss puzzle is slowly being pieced together.

Hopefully, further research will expand on these results, allowing the quorum sensing response to be initiated in those suffering from alopecia.

1 thought on “Quorum Sensing: How Plucking Could Reverse Hair Loss”