We all know how healthy colorful fruit and vegetables are. And quercetin – the flavonol that gives many of these foods their color – is gaining recognition for its impressive list of health benefits. It’s too early to draw definite conclusions, but quercetin shows promise as a preventative treatment for certain types of cancer, heart disease, and may even promote DNA repair. Now, evidence suggests it reduces PGD2 levels – something that may make it an effective treatment for pattern hair loss too.

Quercetin is a flavonoid – a class of organic compounds found in plants and fungi.

As well as giving plants their color, flavonoids help protect against organisms that cause diseases in plants.

And there are benefits for humans too. Flavonoids have gained attention in recent years due to their antioxidant, anti-inflammatory, and anti-bacterial properties. These properties have made them popular candidates for the treatment for a wide range of diseases.

Of these health-promoting flavonoids, quercetin is among the most promising.

Quercetin is found in many foods, including:

It’s perhaps no coincidence that many of these quercetin-containing fruits and vegetables have gained a repuation for being ‘superfoods’.

And a growing body of evidence suggests that quercetin may also be effective for the prevention of heart disease1,2,3. Interestingly, evidence has overwhelmingly demonstrated a strong link between heart disease and pattern hair loss. One study in particular found that men who go bald at the crown before age 45 were 36% more likely to suffer a cardiac event.

So if your hair is starting to thin, quercetin supplementation may be worth considering. As an added bonus, evidence now appears to suggest querectin can stop pattern hair loss as well.

For years, pattern hair loss has been regarded as a hormonal issue – specifically the hormone DHT. 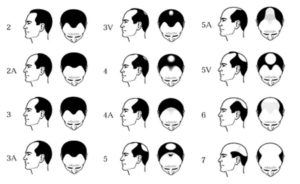 DHT, or dihydrotestosterone, is believed to bind to receptors in hair follicles. Over time, this is believed to cause them to shrink and eventually stop producing hair.

But this explanation has a number of very obvious problems.

And in 2012, a groundbreaking research paper uncovered another important factor in pattern hair loss: PGD2.

PGD2 is a prostaglandin. Prostaglandins are lipid compounds in the body that act in a similar way to hormones. They bind to receptors, which causes changes in the body.

Anyway, the study found that PGD2 levels are around 3x higher in bald men’s scalps compared to non-bald men. Not only that, the researchers also observed that increasing PGD2 levels inhibited hair growth.

This is where quercetin comes in.

Various studies have reported the ability of quercetin to reduce PGD2 levels. This is of interest not only with regards to pattern hair loss but also autoimmune disorders (more on this later).

This study, for example, found that:

“Instead, flavonoids are potent anti-oxidant and anti-inflammatory compounds with mast cell inhibitory actions. Here, we first compared the flavonoid quercetin (Que) and cromolyn on cultured human mast cells. Que and cromolyn (100 µM) can effectively inhibit secretion of histamine and PGD(2).”

And similar observations – that quercetin reduces PGD2 levels – have been confirmed in a number of other studies1,2.

PGD2 is known to play an important role in controlling inflammation in the body. And inflammation is known to accompany pattern hair loss (this is why your scalp tends to feel itchy in balding areas). In fact, it may be this chronic inflammation that explains why bald men’s scalps have increased levels of fibrotic (scar) tissue.

Whatever the explanation, it’s clear that PGD2 is very bad for hair. And since quercetin has been demonstrated to reduce PGD2, it stands to reason that it may prevent pattern hair loss.

There’s even evidence it may help reverse another, more rare, form of hair loss too…

Alopecia areata is a hair loss condition that occurs when the body’s immune system destroys hair follicles. Often, it is characterised by small, circular patches of hair loss. But sometimes it extends to the entire head (alopecia totalis) or the entire body (alopecia universalis).

Alopecia areata is far less common than pattern hair loss, though, affecting around 1 in 1000 people worldwide.

Quercetin, however, is far safer. And studies have shown that it too may be effective for the management of alopecia areata:

“In this study, we tested the effects of quercetin, a bioflavonoid with anti-inflammatory properties, on AA development and HSP70 expression in the C3H/HeJ model. […] Our results demonstrated that quercetin provided effective treatment for [Alopecia Areata] as well as prevention of onset of AA in the C3H/HeJ model, and warrant further clinical studies to determine whether quercetin may provide both treatment for preexisting AA and prevention of recurrent AA. The ready availability of quercetin as a dietary supplement may lead to increased patient compliance and positive outcomes for AA.”

Of course, it’s important to point out that these tests were conducted on mice, not humans. Even so, this provides yet more evidence of the benefits of quercetin for hair loss.

What becomes clear from the studies discussed here is the role of inflammation in both pattern hair loss and alopecia areata. Interestingly, inflammation is also linked to heart disease which, as discussed earlier, is more common among bald men.

So, the evidence in favor of quercetin looks pretty strong. It may not grow a full head of hair on a Norwood 7 overnight, but quercetin should slow and stop hair loss from progressing by reducing PGD2 and inflammation.

So next time you’re at the grocery store, stock up on colorful fruit and veg! Besides improving your hair, this miracle flavonoid boasts a great many health benefits – from reduced risk of heart disease to the potential for DNA repair.

Discuss quercetin and other natural hair loss treatments in the forum!