It’s quite rare to see a randomised, double-blind, placebo-controlled medical trial conducted for a natural hair loss treatment. But a recent such trial – using pumpkin seed oil – has produced surprising results. The trial showed significant hair regrowth in those treated. So, if you’re looking into natural treatments, here’s everything you need to know about using pumpkin seed oil for hair loss.

The study, Effect of Pumpkin Seed Oil on Hair Growth in Men with Androgenetic Alopecia, tested the effects of pumpkin seed oil on men with androgenetic alopecia (male pattern baldness) over a 24 week period. 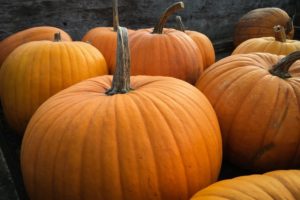 The subjects – 76 men with androgenetic alopecia – were randomly assigned either 400mg or pumpkin seed oil or placebo. Two pills were to be taken twice per day; once before breakfast and once before dinner. The trial was also double blinded; neither the researchers nor the subjects knew who received the pumpkin seed oil and who received the placebo.

This kind of trial is considered the ‘gold standard‘ of research. Since nobody involved in the experiment could know which subject received which treatment, it would be impossible for bias to influence the result.

The following methods were used to test how effective each treatment was:

So, did pumpkin seed oil have any effect on hair?

“After 24 weeks of treatment, self-rated improvement score and self-rated satisfaction scores in the PSO-treated group were higher than in the placebo group (P = 0.013, 0.003). The PSO-treated group had more hair after treatment than at baseline, compared to the placebo group (P < 0.001). Mean hair count increases of 40% were observed in PSO-treated men at 24 weeks, whereas increases of 10% were observed in placebo-treated men (P < 0.001)”

Compared to placebo, those treated with pumpkin seed oil saw significantly better results. This was confirmed through all four assessment methods.

In short, this is very strong evidence that pumpkin seed oil can slow – or maybe even reverse – hair loss.

The photos of participants treated with pumpkin seed oil (representative of a typical patient outcome) clearly show improved hair thickness and density. It’s not a miracle cure by any means, but the results are still impressive.

In the fight against hair loss it is far easier to maintain hair than regrow it. The fact that patients treated with pumpkin seed oil have not only maintained, but quite visibly regrown some of their hair, suggests it has serious potential as a hair loss treatment. 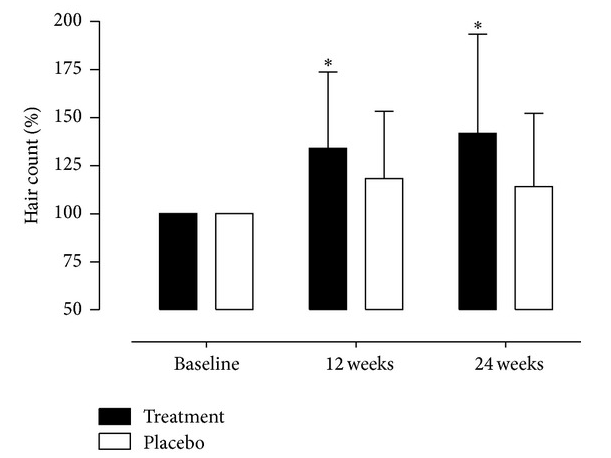 “This study shows that [pumpkin seed oil] supplement during 24 weeks has a positive anabolic efect on hair growth and that this is due to the possible efects of 5-alpha reductase inhibition in patients with mild to moderate male pattern hair loss.”

Although the trial didn’t test for this, the writers suggest that the increased hair count and thickness observed in those treated with pumpkin seed oil could be due to reduced levels of 5-alpha reductase.

5-alpha reductase is an enzyme that converts testosterone, the male sex hormone, into the more potent dihydrotestosterone (DHT). It is DHT which is believed to be the hormone that causes hair loss in men.

Prescription hair loss drugs, such as finasteride and dutasteride, also work by inhibiting 5-alpha reductase. For some men, though, these drugs can cause negative side effects. If this is the case, pumpkin seed oil may be a preferable natural alternative.

Whether pumpkin seed oil works by reducing DHT levels is yet to be shown. However, there are at least two studies (this one and this one) which have shown pumpkin seed oil to reduce prostate size (which is directly linked to DHT levels) in rats. Similar results have also been observed in humans.

Is pumpkin seed oil worth it?

Whether you’re looking into natural hair loss treatments as an alternative to prescription drugs, or looking to bolster your existing hair loss regimen, pumpkin seed oil is well worth considering.

For one, it’s rich in minerals and fatty acids that bring other benefits besides improved hair.

Secondly, it’s highly unlikely to cause side effects.

And finally, the evidence discussed here suggests it really can have a measurably positive impact on hair!