Platelet-rich plasma, or PRP for short, is a relatively new treatment – at least when it comes to hair loss. Despite being around since the 1980s, it’s only recently that doctors have began using it as a therapy for alopecia. However, its effectiveness is still disputed – with doctors and medical professionals on either side of the debate. So who’s right? Does PRP for hair loss actually work?

PRP is a non-surgical procedure that uses the patient’s own blood to stimulate hair growth.

The first step is to draw blood from the body. This is done just like a doctor would if you were having a blood test.

Then, the blood is treated in a centrifuge. This separates the platelets – which are said to contain growth factors that promote hair growth – from the rest of the blood.

The end result is platelet-rich plasma. This is then injected back into the scalp using micro needles.

PRP is commonly used in hair transplant surgery to speed up post-operative recovery. But it can also be used as a standalone treatment to make hair thicker.

The science behind PRP

All of which, conceivably, could have a positive impact on hair growth.

But as of 2016, there have been no large-scale randomized controlled trials of PRP for hair loss.

However, recent hair loss-related findings lend support to the benefits of these growth factors.

For example, a recent Top Hair Loss Treatments article reported on the effects of using a derma roller for hair loss. The article describes a 2013 study which found microneedling to cause significant hair regrowth in subjects with androgenetic alopecia. The researchers proposed that platelet activation and the release of platelet-derived growth factor in response to the microneedling is what caused hair to regrow so dramatically. 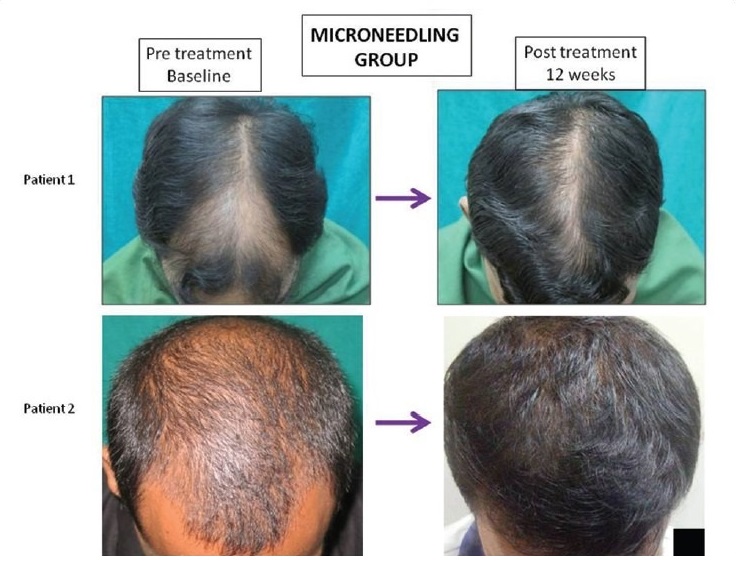 It seems that PRP – like microneedling – taps into the restorative properties of the body’s own growth factors.

When you get a cut or a graze, platelets rush to the site of the injury. The main purpose of this is to stop bleeding, but the growth factors released by platelets stimulate wound healing. This wound healing response, when activated in areas with hair loss, appears to improve hair density and thickness.

Another potential benefit – as suggested in this study of PRP on mice – is stimulation of dermal papillae (stem cells).

This trial of PRP for hair loss paints a very positive picture of the treatment:

The before/after photo included with this trial is especially impressive: 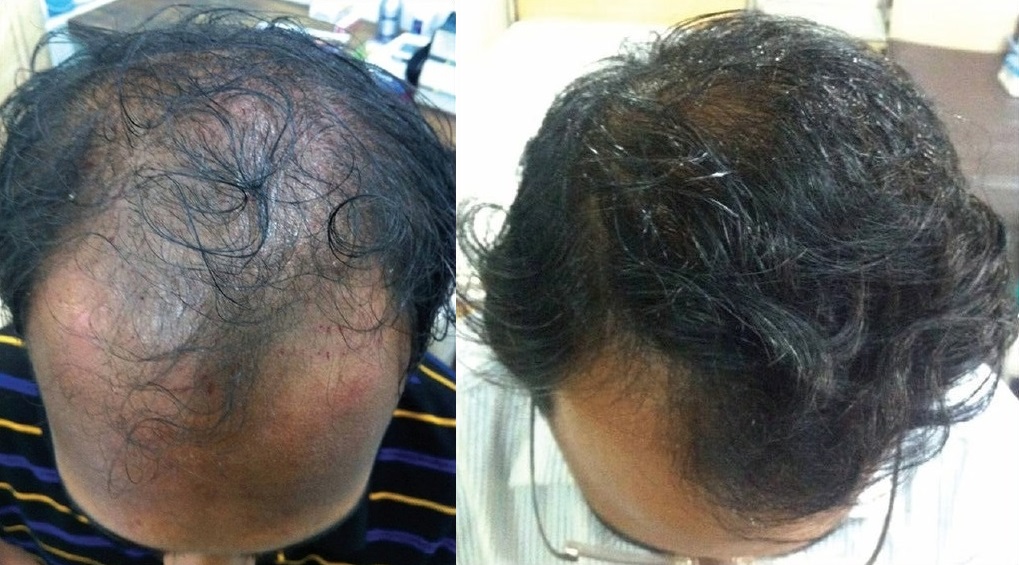 But browsing online forums, it seems the results of PRP are a little more mixed.

A large number of patients see no results whatsoever. Others claim it actually made their hair loss worse.

There are positive results, too. These before and after photos from Bernstein medical, for example, show clear regrowth – at least in the ones published online. It’s certainly not a miracle cure, but it has made a difference. 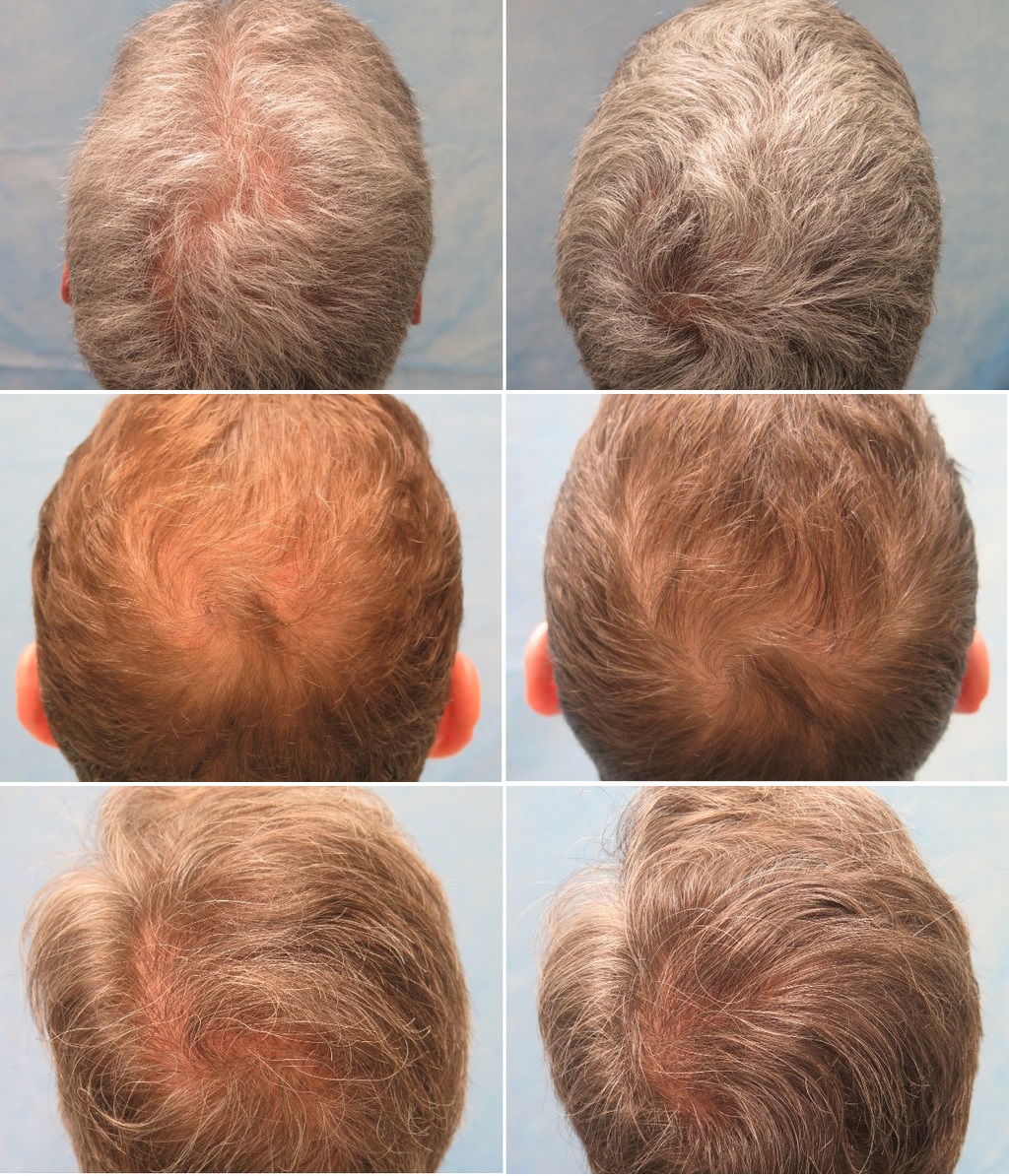 Reading through testimonials and comparing before and after photographs, I get the feeling that PRP is more effective for hair loss in women than men. This may just be the patient results I’ve seen, though.

Perhaps this is because women are less prone to developing androgenetic alopecia. There are many different types of hair loss, and PRP may be more effective at treating these.

Other examples of successful PRP treatment for hair loss in women can be found here and here.

How much does PRP cost?

As hair loss treatments go, PRP is not cheap.

The average cost of one PRP treatment is around $1500 – and it’s not a one session and you’re cured kind of treatment.

As you probably know, androgenetic alopecia (male and female pattern hair loss) is caused by the hormone dihydrotestosterone (DHT). PRP doesn’t appear to do anything to address the miniaturising effects of this hormone, so hair loss is almost certain to continue after PRP treatment.

This makes PRP for hair loss an ongoing commitment. If you get the treatment every other month, say, it could cost as much as $9000 a year. For that price, you could get a hair transplant – a far more permanent solution.

Is PRP worth it?

The positives of PRP are that it is relatively safe and it does appear to be effective – albeit only slightly.


But on balance, the negatives far outweigh the positives.

For one, the results are pretty hit-and-miss.

Perhaps this is down to the different doctors who perform the procedure. But even the best results from PRP for hair loss I’ve seen aren’t particularly impressive.

At least when it comes to male pattern hair loss, alternative treatments – such as microneedling, finasteride or minoxidil – are more effective and cost a fraction of the price. In my view, even natural hair loss treatments produce superior results.

PRP is an interesting treatment that touches on some promising themes in hair loss research. Yes; platelets, growth factors, etc. do appear to play a role in the hair loss puzzle. However, these elements are not yet fully understood and as such PRP seems to be a pretty unreliable treatment.

Not only that, it’s expensive! And since PRP requires multiple treatments, this makes the price particularly offputting.

So, if you’re looking to regrow a significant amount of lost hair, my advice is to put the money toward a hair transplant instead.

Do hair transplants really work? What do the results look like? Find out more here!

4 thoughts on “Platelet-Rich Plasma (PRP) for Hair Loss: What is it and Does it Work?”