For years, it has been widely accepted that dihydrotestosterone (DHT) is the primary cause of male pattern baldness. But in 2012, a groundbreaking medical research paper challenged this previously unchallenged theory. Although DHT does play a part, this new research claimed to have revealed the real cause of hair loss: prostaglandin D2 (PGD2). So is PGD2 the key to curing hair loss?

PGD2 is a prostaglandin. 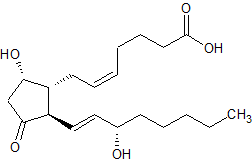 Prostaglandins are lipid compounds in the body which have hormone-like effects. The prostaglandin binds to a receptor, which causes a change in the body.

Different prostaglandins have different effects depending on which receptor they bind to. These interactions are responsible for a broad range of functions, including:

Of course, what we’re interested in is how this relates to hair loss.


Discovery of a link between PGD2 and hair loss

The theory says that hair loss occurs when PGD2 binds to receptor GPR44.

This causal link was established in a 2012 study from Cotsarelis et al:

“We show that prostaglandin D2 synthase (PTGDS) is elevated at the mRNA and protein levels in bald scalp compared to haired scalp of men with AGA. The product of PTGDS enzyme activity, prostaglandin D2 (PGD2), is similarly elevated in bald scalp. […] We show that PGD2 inhibits hair growth in explanted human hair follicles and when applied topically to mice. […] Furthermore, we find that a transgenic mouse, K14-Ptgs2, which targets prostaglandin-endoperoxide synthase 2 expression to the skin, demonstrates elevated levels of PGD2 in the skin and develops alopecia, follicular miniaturization, and sebaceous gland hyperplasia, which are all hallmarks of human AGA. These results define PGD2 as an inhibitor of hair growth in AGA and suggest the PGD2-GPR44 pathway as a potential target for treatment.”

The key findings of the study are:

The hypothesis from these findings is that disrupting the PGD2-GPR44 pathway will stop hair loss.

How does this fit with the current understanding of hair loss? 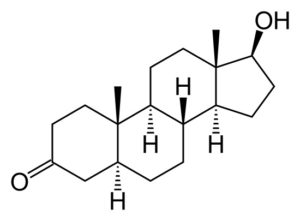 And a link between DHT and hair loss is hard to dispute:

Unfortunately, the precise link is not yet clear.

However, the previously mentioned study did observe:

“Intriguingly, Ptgds [PGD2] is a highly testosterone-responsive transcript, which further suggests its importance in AGA. PGD2 is thought to play a central role in male gonadal sex determination and is highly expressed in male genitalia.”

Whatever the relationship, if the PGD2 angle proves effective in halting hair loss, it may make for more desirable hair loss treatments than are currently available. Many hair loss sufferers find that drugs which lower DHT levels, such as finasteride and dutasteride, cause undesirable side effects.

However PGD2 is linked to DHT – if at all – there’s no denying that it plays a role in androgenetic alopecia.

In the short time since the link between PGD2 and hair loss was discovered, further studies have confirmed its role in hair follicle cycling and growth.

And since a relationship between prostaglandins and conditions such as asthma has been known for several years, drugs which may cure hair loss through this mechanism already exist.

Bimatoprost, a drug already approved to control the progression of glaucoma, is one such example. Glaucoma patients treated with bimatoprost noticed an unexpected side effect of the drug: longer eyelashes. Since bimatoprost is a prostaglandin analog, it has been suggested (as in this research paper) that this is the mechanism of action:

“One recent product to stimulate hair growth has been bimatoprost (Latisse). Bimatoprost is a prostaglandin analogue of Prostaglandin F2a and is prescribed to augment the growth of eyelash hair, with extensive efforts to extend this for the treatment of scalp alopecias […] There exists a precedence for suspecting the importance of lipids in hair follicle function, particularly in the context of the sebaceous gland and scarring alopecias. However, the discovery of the potency for latanoprost and bimatoprost to induce human hair lengthening remains some of the strongest evidence to implicate prostaglandins in hair follicle function.”

In fact, Allergan – the company which makes bimatoprost – have already begun trialing it for androgenetic alopecia.

Early results (see pages 16 and 17 of these presentation slides) indicate that bimatoprost is about as effective as the currently approved hair loss treatment minoxidil. 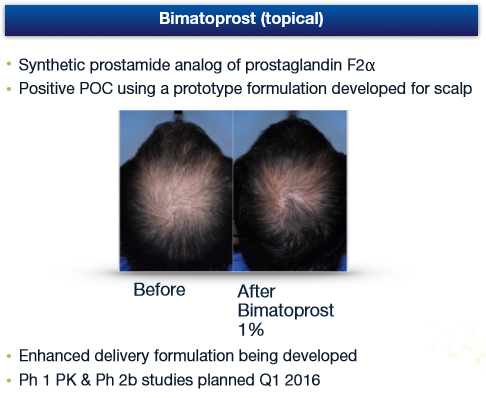 While bimatoprost is no miracle cure, it’s early days and there’s plenty to be optimistic about. Trials aren’t even complete yet, but show promise. What’s more, bimatoprost uses a completely different mechanism of action to current hair loss treatments, meaning it has the potential to be used in conjunction with them to improve results.

But even if bimatoprost doesn’t make it to market, there are plenty of other PGD2-based hair loss cures in the pipeline (such as Setipiprant, for example).

Excitingly, these new treatments have the potential to not only stop hair loss progression, but actually reverse it. From the original study by Cotsarelis et al.:

As our understanding of the relationship between PGD2 and hair loss grows, new products could take advantage of this pathway to restart hair growth. This could mean that even men who are completely bald (Norwood 7) could regrow a full head of hair.

6 thoughts on “Is Prostaglandin D2 (PGD2) the Key to Curing Hair Loss?”