As well as making an extraordinary acting comeback in recent years, Matthew McConaughey’s hairline seems to have made a McConaissance of its own. Photos dating back to the late 90s show the Oscar-winning actor with a heavily receded hairline but in recent years this seems to have transformed into a dense and youthful mane. So what has he done to reverse his hair loss? 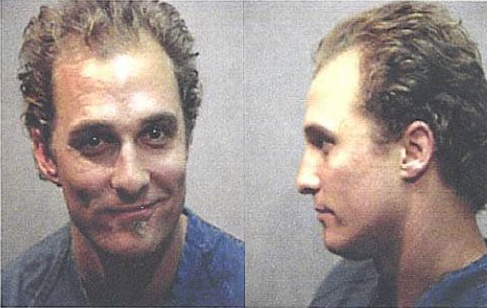 McConaughey was arrested in October 1999 and charged with possession of marijuana and drug paraphernalia. The story goes that police found him dancing naked and playing bongo drums following a noise complaint from a neighbour.

This led to the above mugshot being taken which clearly shows a receded hairline. On the Norwood scale, McConaughey is clearly around a Norwood 3. 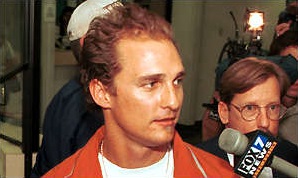 At this time he would have been around 30 years old and these photos show that he was very clearly losing his hair.

Wavy hair, such as McConaughey’s, naturally curves as it grows out, taking up more space. This creates an illusion of thicker hair, concealing baldness better than if he had straight hair. Despite this, these pictures clearly show a receded hairline and thinning mid scalp. At the age of 30, McConaughey’s hair loss was already at a fairly advanced stage.

There’s no doubt that around this time he was suffering from androgenetic alopecia (typical male hair loss).

In a 2001 interview with David Letterman, McConaughey was sporting a full head of hair once again.

“There’s something different about your hair. Am I right about this or am I nuts?!”

It’s kind of a weird question to ask right away and something about Matthew McConaughey’s response isn’t quite right either.

He attributes his hair regrowth to a product called Regenix. 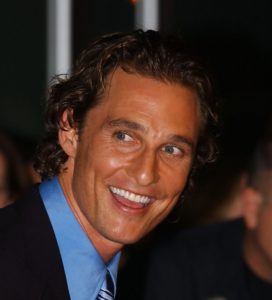 Currently just two products are FDA approved to regrow hair and Regenix is not one of them. There are a lot of snake oil products out there and, while I haven’t tried this product myself, I highly doubt that this product alone could have caused such dramatic regrowth.

The hairline is a notoriously difficult area to regrow hair, even more so than the vertex (crown). Even the FDA approved solutions are unlikely to have actually regrown his hairline so dramatically.

McConaughey does also say he rubbed the product into his hairline for 20 minutes a day. While there may be something to be said for manually stimulating growth this way, reports of success are anecdotal at best.

My suspicion is that McConaughey had his first hair transplant in 2000. He does appear to have real hair in the Letterman interview and it is highly unlikely that this level of regrowth was achieved by any product on the market back then. 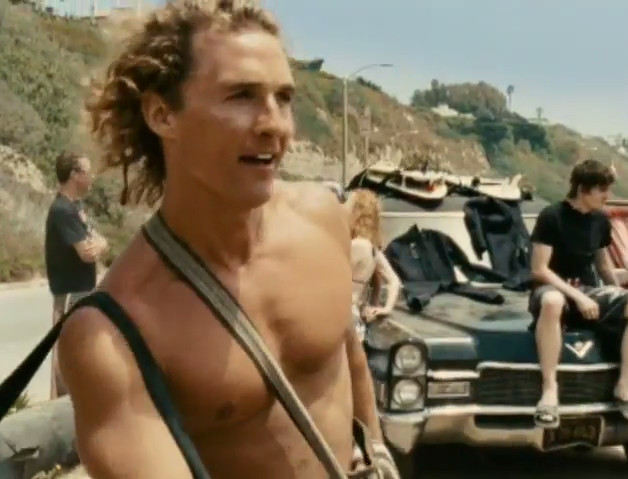 Not a bad head of hair for someone just shy of 40. Especially compared to how it looked 10 years earlier!

The above screenshot from Surfer, Dude (2008) shows McConaughey with a much-improved hairline compared to the 1999 mugshot. However, the density leaves something to be desired.

A hair transplant involves taking hair follicules from areas of the head that are genetically resistant to going bald (the back and sides) and replanting them into the bald areas.

The implanted hair then grows as normal hair. However, a hair transplant won’t stop the existing (native) hair in these areas from continuing to miniaturise and eventually falling out.

By 2008 it seems that this is what was happening to the actor. He no longer has the distinctive ‘island’ of frontal hair and receding hairline characteristic of a Norwood 3. But the hair has continued to thin behind the first transplant.

This is particularly evident from this photo of McConaughey at the 2008 Nautica Triathlon in Malibu: 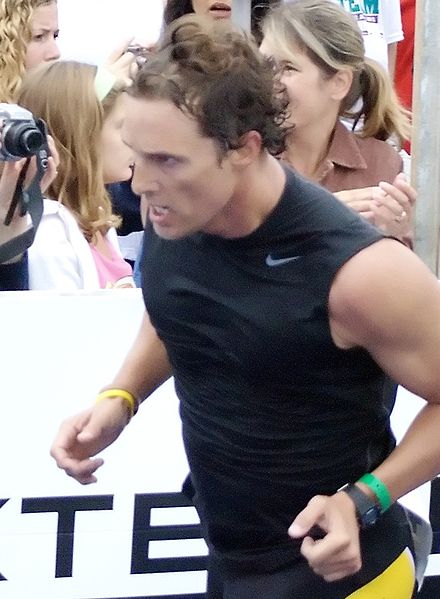 McConaughey’s hairline at the left temple definitely appears to have more hair in comparison to the 1999 mugshot. This supports the theory that he’d had at least one hair transplant by this time.

But with wet hair – having just come out of the water – there’s no hiding the fact that his hair loss has continued. McConaughey’s hair appears thinnest behind the hairline, which would be an unusual pattern for androgenetic alopecia.

Fast forward to 2014 and McConaughey’s hair has made a dramatic comeback.

Here he is at the 2014 Oscars sporting a head of hair worthy of its own award.

With a decent hairline, it’s perfectly possible that this look was achieved with hair loss concealer products such as DermMatch, Toppik, or KeraFiber. For an event as important as the Oscars, you’d expect the actors and actresses to have access to the best hair and makeup on the planet.

But would he really keep this up every day just to conceal his hair loss? In these pictures of him out for a casual stroll had he been in the mirror earlier applying hair fibers to cover up any bald patches? It seems unlikely.

Has Matthew McConaughey had a hair transplant?

In my view, yes. He’s had at least one procedure, probably two.

Acting is a profession that places a great deal of emphasis on looks.

As a leading man often cast as the love interest in romantic comedies, having a decent head of hair is massively important to his career. 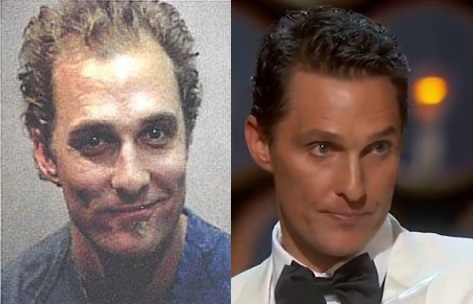 And as an A-list name there’s no doubt that McConaughey has the resources – time and financial – to have have had a hair transplant on at least one occasion. Not only that, he has access to the best advisors on the planet to ensure the best results.

Wouldn’t you do the same in his position? If your career depended on it and money and time were no object?

In an industry obsessed with appearance, Hollywood hair transplant surgeons specialise in maintaining and restoring the hair of their celebrity patients. Modern FUE (Follicular Unit Extraction) techniques are virtually undetectable, don’t require the patient to shave their head, and leave minimal scarring. Just wear a hat for a couple of weeks and no one need ever know!

There’s even rumours that today’s techniques allow celebrities with minimal hair loss to receive ‘top up’ FUE treatments every year or so just to maintain what they already have. This makes it more difficult to detect than if they suddenly went from Norwood 5, say, to a Norwood 2 in a short space of time.

But for McConaughey, the difference is clear. There’s 15 years difference between the two sets of photos above and not only has he maintained his hair, but it actually appears to have regrown. Even with the best medication, this is highly unlikely to have happened without a hair transplant.

With or without hair though, McConaughey is an awesome actor.

And while we’ll never know for certain if he’s had a hair transplant what I will say is that if I was in his position it’s what I would do!


Host Christian Slater is right to sound surprised: “My God, he’s got the miracle solution!”

Yes, McConaughey is sticking to his story from 2001. He claims his miracle hair restoration is from a product called Regenix.

But even as an actor, it looks like he’s pretty uncomfortable telling such a blatant lie.

And presumably he still rubs this product into his scalp every day to prevent hair loss from returning – or is Regenix supposed to be a permanent cure for hair loss?

Give me a break…

9 thoughts on “Has MATTHEW McCONAUGHEY had a hair transplant?”