There are plenty of exciting hair loss treatments in the pipeline. One of the most promising of these is Setipiprant, a drug that should tackle alopecia from a completely new angle. Setipiprant is currently in clinical trials and the science behind this drug is pretty compelling – perhaps this is why biopharmaceutical company Kythera snapped up the rights to it last year. So what’s the latest? Will it be a future hair loss cure, or just another disappointment?

In 2012,  a team of researchers from the University of Pennsylvania published findings which revealed the importance of prostaglandin D2 (PGD2) in normal hair growth.

The current consensus in the medical community is that hair loss – at least male and female pattern baldness – is caused by the hormone dihydrotestosterone (DHT). This hormone is believed to bind to hair follicles, causing them to shrink.

But this research revealed another piece of the puzzle.

For example, PGD2 levels were found to be around 3 times higher in balding scalps when compared to non-balding scalps. And when PGD2 was applied to mice in experiments, it inhibited hair growth. Basically, PGD2 = very bad for hair.

This discovery opened a completely new avenue for hair loss researchers in their search for effective treatments. Setipiprant works in just this way – it stops the effects of PGD2.

For more info on the role of PGD2 in hair loss, as well as other PGD2-based hair loss treatments in development, check out this article.

PGD2 is a prostaglandin. Prostaglandins bind to receptors in the body, which causes a change.

In this particular case, PGD2 binds to the GPR44 receptor. When this happens, hair loss occurs.

But Setipiprant blocks PGD2 from binding to prostaglandin receptors. This should, in theory, stop hair loss from progressing. It may even reverse it. 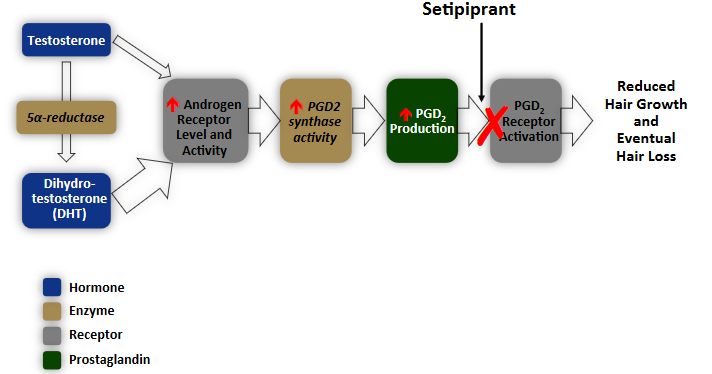 This diagram is from the Kythera Biopharmaceuticals shareholder presentation March 12, 2015.

A second benefit of Setipiprant described in these slides is its ability to extend the anagen (growing) phase of hair follicles. Although this won’t stop androgenic alopecia from progressing further, it will have the short term effect of making hair appear thicker. What’s more, this effect could make Setipiprant an effective treatment for the prevention of telogen effluvium.

Kythera see a number of advantages of Setipiprant over current hair loss treatments.

For one, Setipiprant comes in pill form, which should make it easier to take in comparison to topical solutions such as minoxidil. And by treating hair loss from this unique PGD2 angle, it has the potential to be used in conjunction with other hair loss treatments, improving results.

But perhaps the biggest advantage of Setipiprant is that is expected to have zero anti-androgenic effects.

Finasteride, for example, works by significantly lowering DHT levels. This makes it a highly effective hair loss treatment but brings the potential for negative side effects – in particular sexual dysfunction.

The clinicaltrials.gov page for the trial of Setipiprant was last updated in August when the drug was advanced to stage 2A (dosage requirement) trials.

Of course, it’s promising that Setipiprant has made it to this next stage. It shows that Kythera has some faith in the potential of this drug to make it to market.

It’s still early days though. The trial is expected to be completed in September 2017 and it’s likely to take longer still before it’s commercially available – that’s if it even works.

But a number of PGD2 inhibiting drugs are already in advanced clinical trials due to PGD2’s role in asthma and allergies. This suggests Setipiprant is likely to pass any safety tests. All that remains to be seen is how effective it is at stopping hair loss!

Even if it doesn’t, though, hope is not lost! When Kythera acquired the rights to Setipiprant from Actelion ltd. and the University of Pennsylvania in 2015, it also acquired patent applications for 45 other PGD2 inhibitors. So if Setipiprant doesn’t make it, there are plenty of other drugs that might!

There is every reason to be positive about a hair loss cure in the next few years. It’s not just Setipiprant, either – there are plenty of other treatments in development as well.