This is perhaps the most exciting new hair loss treatment in development. Currently in Phase 3 clinical trials, pyrilutamide (KX-826) is very close to becoming the first FDA-approved treatment for androgenetic alopecia in decades.

Pyrilutamide (KX-826) is a topically-applied androgen receptor antagonist. This means it works by blocking androgens, such as dihydrotestosterone (DHT), from binding to the hair follicle and causing hair loss.

Of course, FDA-approved drugs that target DHT already exist: Finasteride and dutasteride are 5-alpha reductase inhibitors that block the enzyme that converts testosterone to DHT, reducing DHT levels by around 70% and 90% respectively. For many people, this reduction in DHT is enough to halt hair loss in its tracks.

However, the mechanism of action of these existing treatments is very different to pyrilutamide.

Finasteride and dutasteride are orally ingested pills that reduce total (systemic) DHT levels. While this effectively reduces DHT levels in the hair follicle, it also reduces DHT levels everywhere else! And while official data suggests finasteride side effects occur in only around 2% of people, there are many people who are uncomfortable with systemically altering hormone levels for the sake of hair. The endocrine system is highly complicated and, despite finasteride being well-studied over multiple decades, the truth is we still don’t know the full effects of reducing 5-alpha reductase and DHT levels long-term. 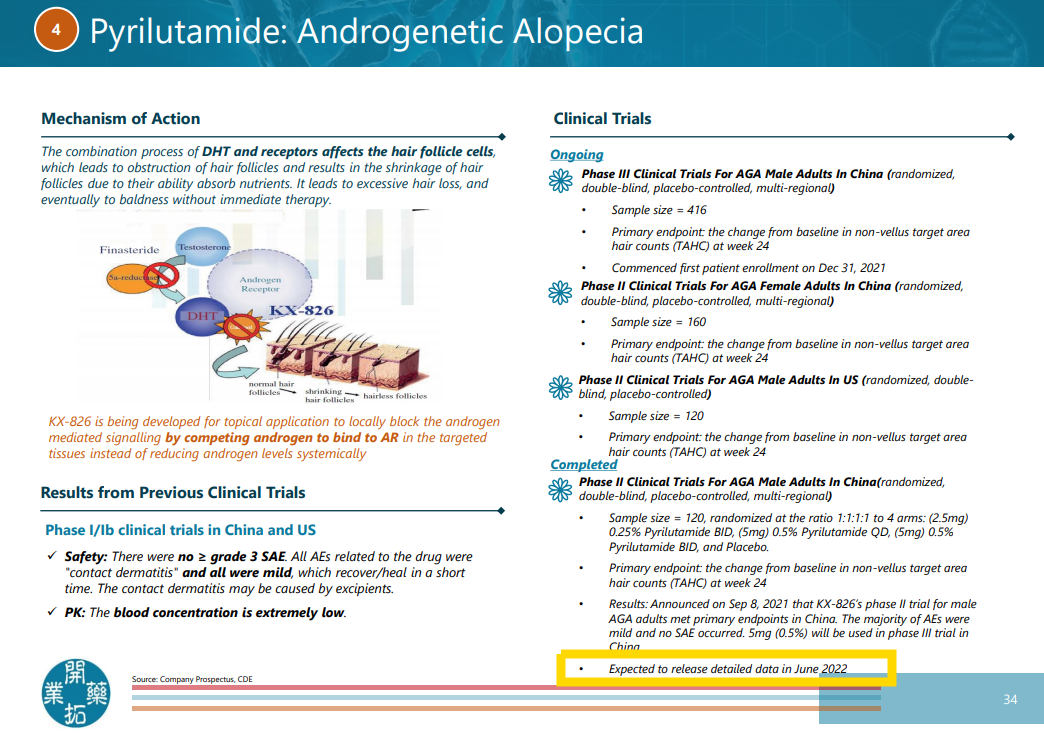 This mechanism of action should result in lower incidence of side effects compared to existing treatments, or alleviate the fears of those who want to treat hair loss but are worried about systemically altering hormone levels.

Although Phase 2 trial results are not officially published, Kintor presented some results at a conference in May 2020.

A summary of the trial and results is as follows:

The greatest results were seen in the 5 mg twice daily group, who experienced a total area hair count increase of 15.34 hairs per cm² above the placebo group in 6 months of use. Unsurprisingly, this is the dose that will be used in the next stage: Phase 3 trials.

So far, from the data presented above, side effects seem minimal and mild.

Although the presentation above found that 16.1% of participants experienced some side effects, these were mostly confined to itchy skin and skin irritation. Apparently, no serious side effects (presumably including sexual side effects) were reported.

At this stage based on the available information, it is hard to know how high these levels are and what effects these could represent. For comparison, average male testosterone levels are in the ballpark of 6 ng/mL (total testosterone) and 1 ng/mL (free testosterone). If pyrilutamide has a high binding affinity for androgen receptors, then this could, in theory, cause systemic side effects.

When will pyrilutamide be available?

The Phase 3 trial of pyrilutamide began in June 2022 and is due to last 6 months. Assuming a month or so to collect and publish the results, we could see the results of this study in early 2023.

Phase 3 is the last stage before a medicine can be commercially released. So, if all goes well, pyrilutamide could be available some time in 2023.

Despite not yet passing phase 3 trials, some hair loss sufferers online are already using pyrilutamide from sellers who produce the chemical and sell it for ‘experimental’ or ‘research’ purposes.

Many of these users have reported their pyrilutamide results online. Reports are mixed, with some quitting due to side effects, others reporting moderate hair growth without any side effects, and this guy basically completely regrowing his hair with photos to back it up.

But it’s hard to draw any firm conclusions from these anecdotal reports at this stage. Each person is likely using different concentrations of pyrilutamide and different delivery vehicles. It may be that some of these chemicals labelled ‘pyrilutamide’ are actually something else entirely.

Is pyrilutamide the hair loss cure we’ve been waiting for?

Pyrilutamide could prove to be the first FDA-approved treatment for androgenetic alopecia in many decades.

But it’s unlikely to be the hair loss cure. For one thing, pyrilutamide will have to be applied regularly (perhaps twice daily like minoxidil) and so hair loss is likely to resume if treatment is stopped. And while the hair regrowth results are promising, an increase of 15.34 hairs per cm² is unlikely to be enough to transform a Norwood 7 to a Norwood 1.