Here’s an actor who’s pretty well known for having a receding hairline. In the many years he’s been on screen we’ve seen his locks steadily diminish – especially at the front. Pictures from a few years back show the Alfie and Sherlock Holmes actor with pretty advanced hair loss. Yet today, he can still look like he’s got a full head of hair. So how does he do it? Is it Hollywood trickery? Or has Jude Law had a hair transplant?

Jude Law first came to widespread public attention starring in 1999’s The Talented Mr. Ripley, for which he was nominated for a number of awards including the Academy Award for Best Supporting Actor.

The film shows Law with a reasonable head of hair – with very slight recession at the temples. 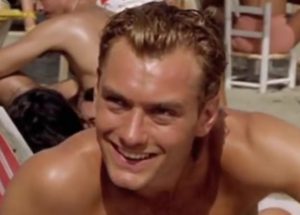 Born in 1972, the actor would only have been about 27 at the time of filming, so this is perfectly normal. Even with Hollywood hair and makeup, there’s no reason to suspect that Jude had lost a great deal of hair at this young age.

But the initial signs of hair loss are beginning to show.

At this point, the actor’s hair loss is around a Norwood 2. 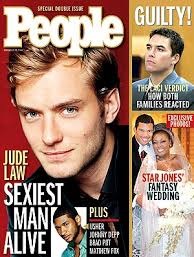 But that didn’t stop People Magazine from naming him 2004’s Sexiest Man Alive.

Jude was – and is – still seen as a Hollywood heartthrob. This led to him being cast as notorious ladies’ man Alfie in the 2004 remake of the classic Michael Caine film. 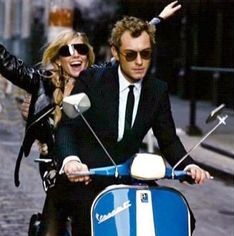 But it was definitely clear at this point that he was losing his hair.

Even with the best hair and makeup teams in Hollywood, Jude’s receded hairline is very distinct. He still has decent overall coverage and strong density in the areas with hair, but the bald spots at the corners of the fringe are definitely bigger than they were in 1999.

Still, it didn’t stop him being named Sexiest Man Alive – just goes to show you can still be attractive with hair loss! 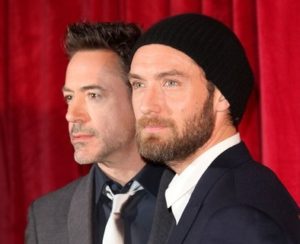 Five years on and the actor’s hair continued to creep backwards.

And it seems Jude noticed it himself – around this time he started to wear hats more frequently.

Beanie hat with a suit? Not the best look.

And here he is at a different premiere of the same film (below). This time, though, he’s left the hat at home. 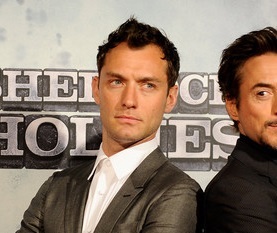 Yes, his hairline has receded, but he still looks good!

And at 37 years old, it’s perfectly normal to have lost some hair.

But he’s an actor. And there’s a lot of pressure in Hollywood to look perfect.

But if he was worried about hair loss then, it was about to get a whole lot worse!

What little hair Jude had at the front of his head was well on its way out by 2011.

Here he is pictured with wet hair on a holiday in Cannes: 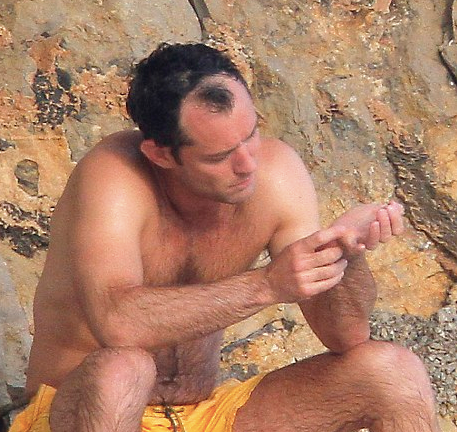 Jude Law’s hair loss was at least a Norwood stage 3 by this point.

Not only are the temples heavily receded, the hair behind the forelock has mostly disappeared too. This ‘island’ of hair is quite a common hair loss pattern and it suggests he was well on his way to Norwood 4 by this point.

Yet just a year later, Jude Law seemed to have (mostly) regained his hair.

Here he is at the 2012 Toronto International Film Festival, with what looks like a decent amount of density and coverage: 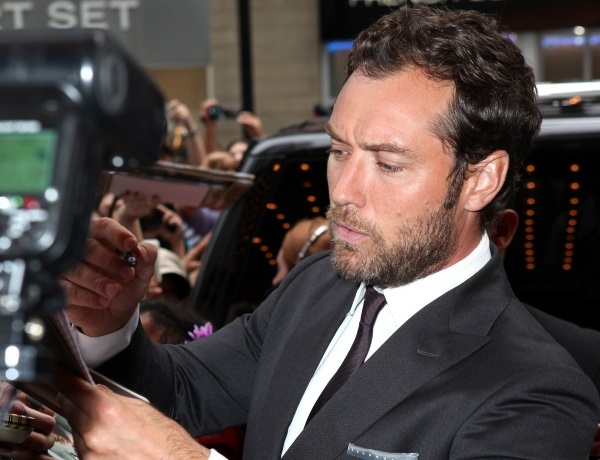 He still has the distinctive receded hairline, of course, but his hair appears to have gotten much thicker in only a year.

But then the next year, Jude’s hair was back at 2011 levels: 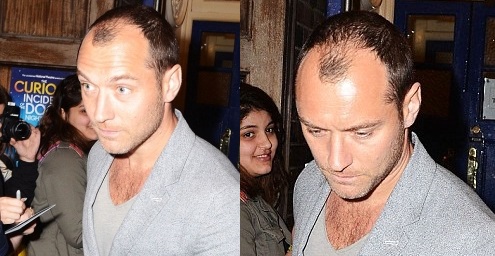 In fact, Jude is very nearly a Norwood 4 at this point. But it could just be the short hairstyle that makes his hair loss look so advanced.

Present day – has Jude Law had a hair transplant? 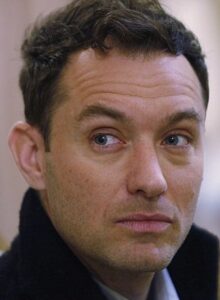 All this back and forth is hard to keep track of, I know. But here’s one last photo (from 2015) to further confuse things.

Once again, Jude’s hair appears to have miraculously returned!

So what is it? Vitamins? Meds? A hair transplant? Magic?

Probably none of the above (except maybe hair loss medications).

If he’d wanted to, Jude Law could easily have had a hair transplant.

For one, he’d have access to the top Hollywood cosmetic surgeons.

And as a famous actor he won’t be short of money to pay for the procedure.

What’s more, hair transplantation has become increasingly advanced in recent years. Minimally invasive techniques mean celebrities can get hair transplants done without anyone realising. As long as the change isn’t too dramatic, no one need ever know. For more information, check out this article which talks about celebrities getting ‘top up’ FUE hair transplants on the sly.

But I don’t think Jude Law has had a hair transplant.

If he had done, why wouldn’t he go the full way and completely cover his temples with hair?

I suppose it could be argued that this would be too noticeable a change, but so what? Hair transplant surgery is becoming increasingly common and he could have just admitted to it!

So what has he done to his hair?

The fact that Jude Law’s hairline has gone backwards and forwards numerous times over the years suggests he’s no stranger to hair loss concealer products such as Toppik, Kerafiber, and DermMatch.

These sorts of products are standard in Hollywood. Make up artists even use them on actors who have a full head of hair already to give the illusion of thicker hair under harsh light.

And they’re pretty good, too. Take a look at the example below. This was achieved through concealer alone.

I’d guess this is the kind of product Jude Law uses to conceal his hair loss. He may even wear a hair piece, though that seems less likely. And, of course, he probably uses hair loss treatments to minimise any further hair loss.

But has he had a hair transplant? It seems unlikely. Though with today’s procedures, anything’s possible.

10 thoughts on “Has JUDE LAW had a hair transplant?”