Never heard of FUE or SMP? FUE stands for Follicular Unit Extraction and refers to a method of hair transplantation. SMP stands for Scalp Micropigmentation, a cosmetic procedure that gives the illusion of very short hair. These two hair loss treatments can be combined together to create the appearance of a full head of hair – even if you’ve lost a significant amount already.

Scalp micropigmentation is sometimes unflatteringly referred to as a ‘hair tattoo’.

It’s a bit more sophisticated than the kind of ink you’d get at your local tattoo parlour, but that is essentially what it is.

Specialised pigments are deposited in the skin at varying depths and angles to create the illusion of very short hair.

The needles used in SMP do not penetrate as deeply as a standard tattoo needle. This makes for a more natural look than could be achieved with a regular tattoo gun.

Personally, though, I’m not a huge fan.

Occasionally, on the right person, at the right angle and under the right lighting, it can look OK. But in most cases it’s pretty obvious when someone has had it done.

There’s a guy at my gym who’s had SMP. There’s just something about a very short haircut with a too-perfect hairline that doesn’t look right. Most days, he wears a hat – I think that says it all.

But I don’t want to be too negative about SMP. It has certainly improved a lot in the ten or so years it’s been around.

It doesn’t look like a tattoo, as you can see. But does it look like real hair? I’ll let you be the judge.

And then there’s the issue of what it feels like. The look of stubble but the feel of a bald head? How do you explain that?

But despite this, I actually think SMP is a pretty cool hair loss treatment – when used in combination with FUE.

Follicular Unit Extraction is a method of harvesting hair follicles for use in hair transplantation surgery.

Hair follicles are extracted from areas resistant to hair loss – the back and sides – and moved to the bald areas – i.e. the top of the head. The newly implanted hairs then grow as normal.

Unlike the older ‘strip’ method – where a section of scalp is cut from the back of the head – FUE leaves very little scarring when performed by a skilled surgeon.

Hair transplant surgery is still greatly misunderstood. People still refer to it as getting ‘hair plugs’ or talk about ‘fake’ hair. But the truth is hair transplant surgery works. When performed by a skilled surgeon, the results can be indistinguishable from a natural head of hair. If you don’t believe me, check out this article.

Perhaps the biggest drawback of hair transplant surgery, though, is the lack of donor hair.

See, you only have a finite amount of hair that can be taken from the back and sides of the head. The average person has around 8000 hair follicles that can be used for hair transplantation. Once this is used up, that’s it.

So if your hair loss is Norwood stage 6 or 7, say, you’ll have a large area to cover with only a small number of hair follicles. Unless you have very thick hair, it’s unlikely you’ll have enough donor capacity to create the appearance of a full head of hair.

And that’s where SMP comes in.

As mentioned earlier, my biggest problem with SMP is how it looks at the hair line.

I know they match the size, depth, colour, thickness – everything – to match the appearance of natural hair. But nine out of ten times it just doesn’t look natural!

But a well performed hair transplant can look completely natural.

So if you’re lacking the donor capacity for a full head of hair, you can use the hair you do have to create a natural looking hairline. Then, SMP can be used to create the illusion of greater density elsewhere on the scalp.

It’s best illustrated with an example:

As you can see, this man had some pretty advanced hair loss. But with only 2194 FUE grafts, he has managed to regain his hairline.

Best of all, it looks completely natural.

Compare the two photos below. The added texture of the FUE grafts (right) makes for a far more natural appearance than SMP alone (left): 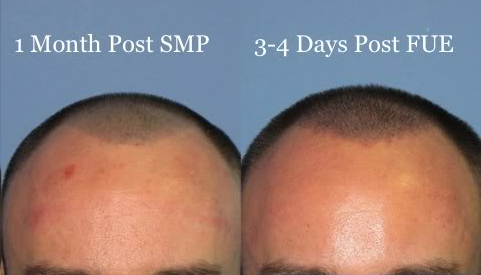 Despite advanced diffuse thinning, this man’s hairline is of reasonable density and, most importantly, real hair. 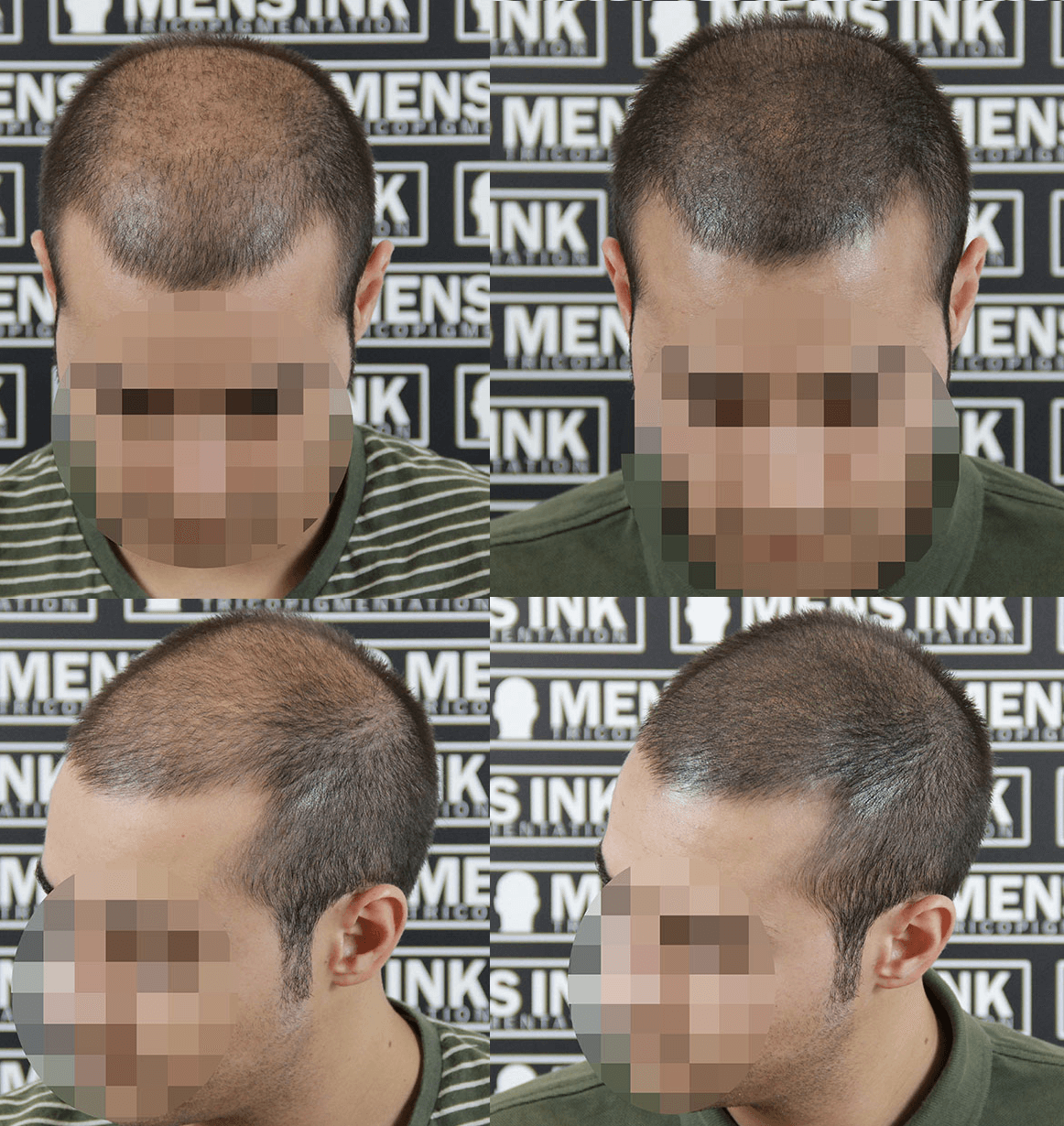 The addition of SMP creates the appearance of density without the unnatural look you get from SMP only hairlines.

What’s more, the FUE and SMP combination solves another problem: the feel.

By adding real-life hair follicles to complement the SMP, the feel of the scalp will match how it looks. No longer will you have to answer awkward questions about why your scalp feels bald but looks hairy!

But just like getting a hair transplant, the cost of SMP varies greatly.

And while SMP is reversible, it’s not a good idea to scrimp on price too much. Like most things in life, you get what you pay for.

Do your research, look at the before and after photos, and don’t be afraid to ask questions.

It’s also worth bearing in mind that SMP results aren’t permanent. For most people, SMP will fade after about five years, so you’ll have to factor that cost in too. Fortunately, touch-up procedures are generally less expensive.

But to create a natural hairline, you’ll need to fork out for FUE too. And when you add these costs together, it’s not cheap.

In the US, for example, each FUE graft can cost between $3 and $8. Given that it is likely to take at least 2000 grafts to create a new hairline, you’re looking at around $6000 as a best case scenario.

But the FUE and SMP combination can be very effective. For those with very advanced hair loss, it’s an effective way to regain the appearance of a full head of short hair.

What are your thoughts on scalp micropigmentation? Would you get it done? Let us know in the forum!