Ever wondered why it’s mostly men who go bald? Testosterone, the male hormone, gets converted to dihydrotestosterone (DHT), which binds to the hair follicle, causing it to shrink. Two drugs are medically approved to lower levels of this hormone, but which is the best hair loss treatment? finasteride or dutasteride? Propecia or Avodart?

DHT is a more potent form of the male hormone testosterone. The androgen receptor affinity of DHT is more than twice that of testosterone, making it more damaging to hair.

DHT is converted from testosterone by the enzyme 5-alpha reductase.

As an androgenic hormone, it plays a role in the development and maintenance of male characteristics. DHT is particularly important in fetal development – males who suffer from a rare deficiency of the hormone are born with underdeveloped male genitalia and prostate. Interestingly, though, these males never go on to develop androgenetic alopecia (male pattern hair loss).

This observation, along with various experiments and trials, prove the link between DHT and hair loss. And while recent research suggests there might be more to the hair loss story than just DHT, the link is clear. As a result, medical hair loss treatments have tended to focus on blocking DHT to treat hair loss.

Finasteride is the most widely prescribed hair loss treatment.

conversion of testosterone to DHT. Studies show it lowers DHT levels in the body by 71.4% when taken daily.

For more information, read The Truth about Finasteride Side Effects.

And so the Avodart (0.5mg dutasteride) pill reduces DHT levels by approximately 95%.

A more detailed summary of the differences between finasteride and dutasteride can be found in this research paper. A summary of the findings can be seen in the table below: 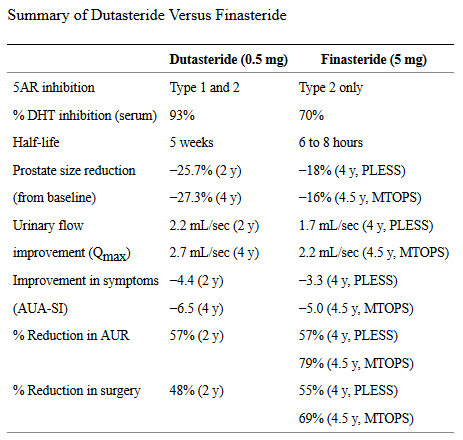 Currently, though, dutasteride is not approved as a hair loss treatment. Instead, Avodart is only FDA approved to treat benign prostatic hyperplasia (enlarged prostate). 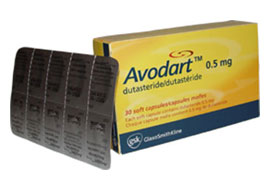 But it is sometimes prescribed off-label to treat hair loss. And it is extremely effective. For example, this trial of dutasteride for hair loss found:

Olson et al. noted similar findings in their comparison of finasteride and dutasteride for hair loss. In a controlled target area, the following changes in hair count were noted after 24 weeks of treatment with the following treatments:

But perhaps the clearest example of how effective dutasteride is for hair loss is twinshairloss.com. This website documents the difference in hair loss for two twins – one on dutasteride, one not.

Upon noticing the first signs of hair loss in 2003, one twin started treatment with dutasteride. The other waited until 2010. These pictures show a clear difference: 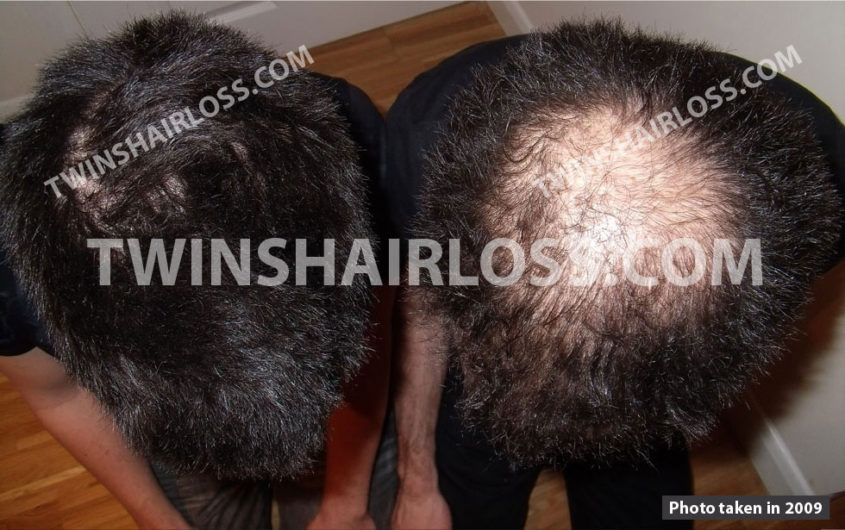 As the twins note, it is far easier to maintain hair than regrow it. With DHT levels 95% lower than his brother, the twin on the left has maintained a full head of hair despite having hair follicles which are clearly genetically susceptible to the effects of DHT.

Reducing DHT levels so dramatically will stop hair loss in its tracks. Hair loss sufferers who still have some hair left are also likely to notice their existing hair get thicker too.

And the reason why many individuals who take these drugs suffer side effects is that the role of DHT in the body is more than to simply cause hair loss.

Oral 5-alpha reductase inhibitors like dutasteride and finasteride don’t just reduce DHT levels in the target area (the scalp), they reduce DHT levels systemically. This means levels of the hormone will be lower in other areas where DHT expression is felt. The most commonly noticed side effects of DHT inhibiton are to do with sexual function, namely:

Safety trials of finasteride, for example, have typically noticed these effects in around 2% of participants.

But because dutasteride reduces systemic DHT levels by 95% (vs ~71% for finasteride) the incidence of these unwanted effects are much more commonly reported.

This trial, for example, found:

This figure of 5-9% is significantly higher than is reported with finasteride use.

What’s more, the serum half-life of dutasteride is approximately 5 weeks compared to just 6-8 hours for finasteride. This means DHT levels will remain suppressed for significantly longer in dutasteride users after discontinuing. Like finasteride, some users have even reported persistent side effects long after use.

But more worryingly, dutasteride has been linked with increased incidence of high-grade prostate cancer.

This is because dutasteride may temporarily reduce the growth of benign tumours on the prostate. Potentially, this masks the detection of early stage prostate cancer, delaying diagnosis and increasing the risk of developing high-grade prostate cancer. Consequently, the FDA has added a safety alert for this.

Should I take finasteride or dutasteride for hair loss?

Although dutasteride is a slightly more effective hair loss treatment than finasteride, it is not FDA approved for this use. Dutasteride users can expect slighly better results than finasteride for their hair, but they can also expect greater incidence of side effects.

Dutasteride is the more potent DHT inhibitor, lowering 5-alpha reductase types 1, 2, and 3. However, type 1 is not present in large amounts in the hair follicles, suggesting its role in hair loss is not as significant.

On balance, then, finasteride is the better choice for many hair loss sufferers. It targets the hormonal cause of hair loss with a lower risk of side effects. For many, it will be enough to dramatically slow the progression of hair loss. But if it isn’t, then dutasteride is always an option.

This recent study compared the effects of 1mg finasteride and 0.5mg dutasteride in men with male pattern hair loss. It found dutasteride to cause significantly greater hair regrowth:

Perhaps most excitingly, the study also found that dutasteride was highly effective at reversing ‘thin hair count’ – or, in other words, hair that was already miniaturised. This means – in some cases – dutasteride can be effective at regrowing hair, not just maintaining it.

The finasteride group, in contrast, saw an increase in thin hair count, which “suggests a failure of finasteride in reversing the miniaturization process.”

Both groups saw a similar incidence of side effects.

So, if you’re looking to get tough on hair loss, it seems dutasteride may be the way to go!

Have you successfully reversed hair loss with dutasteride? Let us know in the forum!

2 thoughts on “Finasteride or Dutasteride for Hair Loss?”