Ever wondered what it is that makes your shampoo so foamy? Me neither. But apparently we should pay more attention to the ingredients we use to clean our hair. Sulfates – found in over 90% of shampoos – may actually do more harm than good. So are they really that bad? Do sulfates in shampoo cause hair loss? Let’s take a look at the evidence.

Sulfates are an ingredient used in shampoos and other cleaning products. They’re what creates the lathering effect and the thing that actually cleans your hair. The most common ones found in shampoos are:

Over 90% of all shampoos contain one of these three ingredients.

They’re what’s known as surfactants – they bind to the dirt and grease in your hair and on your scalp. When you rinse your shampoo out, the surfactant takes all the nasty stuff with it, leaving your hair fresh and clean.

The most commonly used sulfate – SLS – is often derived from coconut and palm oils. It’s a potent de-greaser – so strong, in fact, that it’s also used in industrial cleaning products.

For some, the fact that an ingredient used to clean engines is also found in shampoo sets alarm bells ringing.

Can sulfates cause hair loss?

Sulfates undoubtedly dry the hair out. The de-greasing properties that clean the hair also mean sulfates absorb the natural oils from the scalp.

Unfortunately, there’s no real solution to this other than to stop washing your hair altogether. Any shampoo that cleans your hair will also strip your hair of natural oils.

But it’s not just dry hair that’s the problem.

In recent years, interest in sulfate-free shampoos has increased rapidly: 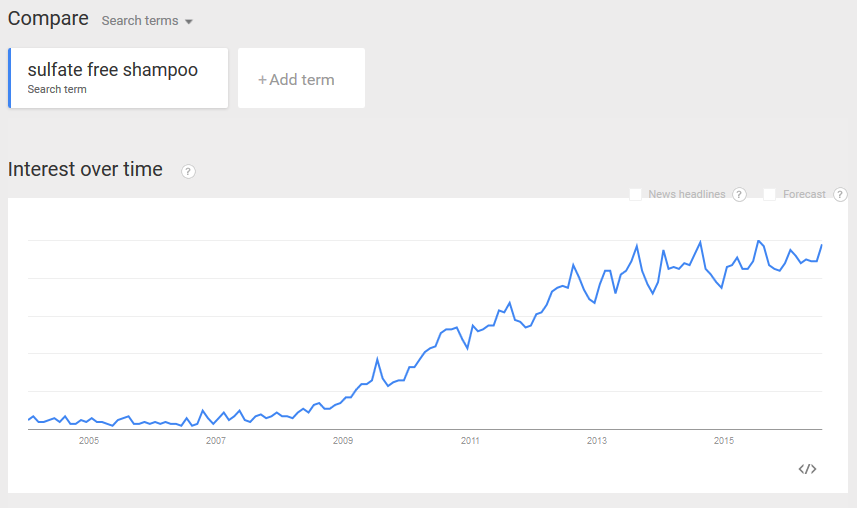 This is largely due to concerns that sulfates actually cause hair loss as well as other health problems.

And there is at least some evidence supporting these concerns. For example, this assessment by independent organisation the Cosmetic Ingredient Review found:

“Sodium Lauryl Sulfate and Ammonium Lauryl Sulfate are irritants in patch testing at concentrations of 2 percent and greater, and that irritation increases with ingredient concentration. In some cosmetic formulations, however, that irritant property is attenuated. The longer these ingredients stay in contact with the skin, the greater the likelihood of irritation, which may or may not be evident to the user.”

Irritants? Doesn’t sound like something you’d want on your skin! 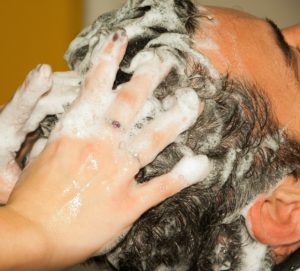 What’s more, many shampoos contain far higher concentrations of these sulfates than the 2% quoted here – it’s not uncommon to find concentrations as high as 10% or 20% in shampoos!

And with irritation linked to inflammation, it’s definitely plausible that there could be a potential link between sulfates and hair loss – inflammation is a key component in the hair loss puzzle.

The assessment also notes that large quantities of sulfates remained in the hair follicles of rats tested with SLS:

“Auto radiographic studies of rat skin treated with radio-labelled Sodium Lauryl Sulfate found heavy deposition of the detergent on the skin surface and in the hair follicles; damage to the hair follicle could result from such deposition. Further, it has been reported that 1 percent and 5 percent Sodium Lauryl Sulfate produced significant number of comedones when applied to the pinna of albino rabbits. These two problems – possible hair loss and comedone formation – along with proven irritancy, should be considered in the formulation of cosmetic products.”

Yikes! Traces of sulfates may remain even after washing your shampoo out. And what’s worse is they could potentially cause hair loss according to this report.

So should you throw away your shampoo?

It’s a big jump from the above claims to the claim that shampoos containing sulfates cause hair loss.

For one, the sulfates in these experiments were left on the skin for far longer than you’d leave shampoo in your hair.

And secondly, there’s no evidence that sulphates left over after washing would cause hair loss – the writers only claim that it could.

“Sodium Lauryl Sulfate and Ammonium Lauryl Sulfate appear to be safe in formulations designed for discontinuous, brief use followed by thorough rinsing from the surface of the skin. In products intended for prolonged contact with skin, concentrations should not exceed 1 percent.”

So don’t go getting rid of your shampoo just yet.

But despite sulfates being mostly safe, it seems many shampoos aren’t as innocent as the manufacturers claim.

In light of this, it’s worth taking the following precautions when washing your hair:

So while there is some cause for concern about sulfates in your shampoo, the risks are minimal. On balance, sulfates are pretty safe. And, many sulfate-based shampoos have ingredients which promote hair growth and prevent hair loss.

There are many possible reasons why people experience hair loss. But unless you’re allergic to sulfates, it’s unlikely that your shampoo is the culprit.

4 thoughts on “Do Sulfates in Shampoo Cause Hair Loss?”