In 2007 the FDA approved the first laser device to treat male pattern hair loss. Since then, there has been fierce debate as to whether low level laser therapy is an effective hair loss treatment. So what’s the truth? Do laser combs work for hair loss?

But it is also claimed to be effective as a hair loss treatment too. 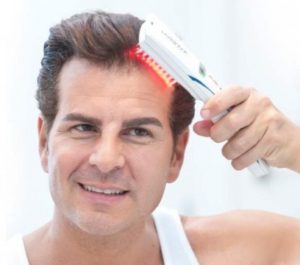 In fact, an LLLT device – the HairMax Laser Comb – has the distinct accolade of being FDA approved to treat hair loss.

This is a pretty big deal. Currently, just two other products – finasteride and minoxidil – are FDA approved for this use.

The device itself looks, essentially, like a big comb. Bristles (or ‘teeth’) part the hair like a standard comb, but at the base are a number of lasers which are said to stimulate hair growth.

Manufacturers of laser comb devices recommend that they’re used for 5 to 10 minutes every other day.

Evidence for the laser comb as a hair loss treatment

There is some clinical evidence that laser combs can be effective for treating hair loss.

This trial, for example, randomly divided subjects into two groups. One group were treated with a laser comb, the other with a ‘sham’ device (a placebo). After 26 weeks, the study found:

“We observed a statistically significant difference in the increase in terminal hair density between lasercomb- and sham-treated subjects. No serious adverse events were reported. Our results suggest that low-level laser treatment may be an effective option to treat pattern hair loss in both men and women. Additional studies should be considered to determine the long-term effects of low-level laser treatment on hair growth and maintenance, and to optimize laser modality.”

And this trial tested the HairMax Laser Comb specifically on subjects with androgenetic alopecia (male pattern hair loss). It found:

“This double-blind, sham device-controlled, multicentre, 26-week trial randomized male patients with Norwood-Hamilton classes IIa-V AGA to treatment with the HairMax LaserComb or the sham device (2 : 1). The sham device used in the study was identical to the active device except that the laser light was replaced by a non-active incandescent light source. Of the 110 patients who completed the study, subjects in the HairMax LaserComb treatment group exhibited a significantly greater increase in mean terminal hair density than subjects in the sham device group (p < 0.0001). Consistent with this evidence for primary effectiveness, significant improvements in overall hair regrowth were demonstrated in terms of patients’ subjective assessment (p < 0.015) at 26 weeks over baseline.”

These trials suggest that LLLT may well be an effective hair loss treatment.

And the decision by the FDA to approve the HairMax laser comb to treat hair loss lends further weight to the effectiveness of LLLT.

How does LLLT work?

According to the HairMax site, the laser comb works in the following way:

Interestingly, though, there is no mention of Dihydrotestosterone (DHT) – the hormone believed to be responsible for androgenetic alopecia.

The current scientific of male pattern hair loss is that DHT binds to the hair follicle. Over time, this causes hair to thin. Eventually, the hair becomes so thin that it is no longer visible.

And while exciting new theories highlight the importance of other factors – such as prostaglandin D2 (PGD2) – DHT undoubtedly plays a role in hair loss. If it didn’t, DHT-blocking medications like finasteride and dutasteride wouldn’t be so effective at slowing and reversing hair loss. That said, minoxidil does not affect DHT levels, but it is a reasonably effective hair loss treatment.

In general, the method through which LLLT works – if it even works at all – is not clear. Phrases such as ‘awakens’ and ‘energizes’ are not scientifically meaningful.

But the first claim – that increased growth factors boost hair growth – may have some merit (check out this article on derma rolling for hair loss for more info). And LLLT has been shown to have an impact on growth factors.

The evidence against LLLT as a hair loss treatment

Despite being FDA approved, there are doubts as to how effective LLLT is as a hair loss treatment.

For one, it is only the safety of LLLT that has been approved, not its effectiveness, as this paper explains:

“Currently, there exist several LLLT devices marketed for the treatment of alopecia, which claim to stimulate hair growth; yet marketing these devices only requires that safety, not efficacy, be established.“

This same paper goes on to criticise the way in which many of the trials for LLLT were conducted:

“A handful of studies have since investigated the efficacy of LLLT for alopecia with mixed results. These studies suffered from power, confounding and analysis issues which resulted in a high risk of bias in LLLT studies. Due to the paucity of well-conducted randomized controlled trials, the efficacy of LLLT devices remains unclear.”

And many established medical professionals in the hair loss community question the effectiveness of LLLT. IAHRS hair transplant surgeon Dr. Feller, for example, expresses scepticism (to put it mildly) about LLLT in this forum post.

HairMax, manufacturers of the first LLLT laser comb, provide a number of before and after results photos for their product.

The actual wording on the site is somewhat ambiguous.

The claim is that the laser comb has ‘helped’ men and women regrow hair. However, it is unclear whether this is in conjunction with other proven hair loss treatments. Many of the results photos are impressive though – but, bad results could simply be excluded.

A quick search of results on hair loss forums shows mixed results. Some claim it helps, others that it doesn’t do anything.

Should you buy one?

Laser combs are certainly a safe hair loss treatment. Whether they actually work is another question.

This wouldn’t be too expensive if results were beyond doubt. But many people – including doctors specialising in hair loss – do not believe LLLT is effective.

However, there is at least some evidence in support of LLLT.

If you do decide to try out LLLT for hair loss, I would recommend using it in conjunction with proven hair loss treatments.

For now, though, the jury is still out whether LLLT works for hair loss.

6 thoughts on “Are Laser Combs a Scam? Or an Effective Hair Loss Treatment?”