The average scalp contains roughly 100,000 to 150,000 hairs. And it’s normal to lose around 100 of these each day. If you’re seeing an increase in hair fall – more hair in your brush, in the shower, or a worrying amount coming out in your hands when touched – it’s important to identify what’s causing it. In many cases, the underlying reason will be genetic but environmental factors are also known to influence hair health. In this article we’ll take a look at the different types of hair loss, common causes, and effective treatments.

A typical hair growth cycle lasts between two and six years. During this time the hair will remain in the growth stage (anagen) for the majority, before falling out to be replaced by a telogen hair. Telogen hair is very fine and almost invisible. This is the resting stage. Normally, it will stay in this stage for between two and three months, before the cycle begins again. 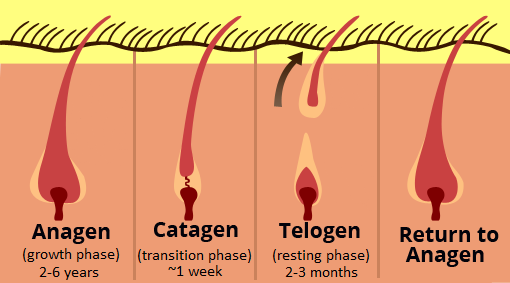 But with telogen effluvium, this balance 85/15 balance is skewed. Far more hair enters the telogen stage, making it look thinner. It can affect both men and women equally.

In general, telogen effluvium is caused by severe stress – physical or emotional – to the body, such as:

Unlike androgenetic alopecia (see below), for example, hair loss caused by telogen effluvium presents itself evenly across the entire scalp.

Hair loss caused by telogen effluvium is usually self-correcting. Unless chronic stress causes hair to persistently remain in the telogen stage, the normal hair growth cycle will resume within 2-3 months of the stressful episode.

To reduce the time hair spends in the telogen stage, some experts recommend using the hair growth stimulant minoxidil.

Alopecia areata is an autoimmune disease which causes hair to be lost from some, or all, areas of the body. It is sometimes called spot baldness, due to the fact that it usually only occurs in distinct spots. 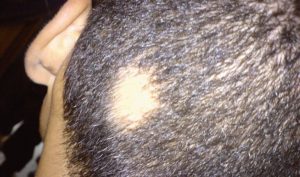 It occurs when the body no longer recognises its own cells. When this happens the immune system attacks the hair as if it were an invading body, like a virus. Alopecia areata often causes circular patches of hair to be lost from the scalp initially, but in around 1-2% of cases the condition leads to entire loss of hair from the scalp (alopecia totalis) and even entire loss of hair from the body (alopecia universalis).

The appearance of alopecia areata is characterised by distinctive, circular, patches of hair loss. Often, the surrounding area is unaffected. The affected areas of skin will be unscarred, although closer examination may reveal hyperkeratotic plugs (yellow dots) and black dots – hairs which have been destroyed by the immune system.

Currently, corticosteroids (such as fluocinonide and clobetasol) are used to treat alopecia areata, with limited effectiveness. These are taken either in pill form, injected into the affected area, or applied as a topical cream (which is less effective). Unfortunately, corticosteroids can also bring nasty side effects.

Other commonly used treatments include:

With inflammation strongly linked with androgenetic alopecia (see below) too, many are optimistic that these great results might also shed light on this condition too.

It is normal for hair volume and thickness to decrease with age. This is known as involutional alopecia.

With age, the hair cycle gets shorter, meaning hair appears thinner. The anagen stage (see Telogen effluvium, above) gets shorter, causing each hair to enter the resting phase more quickly. This means that instead of 85% of your hair being in the growth stage at any one time, it is likely to be lower, resulting in thinner hair.

It is natural for the hair cycle to decrease with age. However, eating a healthy, balanced, diet rich in important vitamins and minerals for hair will ensure your hair is as healthy as it can be, making the effects of involutional alopecia less noticeable.

Traction alopecia is caused by sustained force being applied to the hair over time.

Most commonly, this occurs when hair is worn tightly in styles which pull the hair in a particular direction (ponytails, pigtails, braids, etc.). This can be usually be identified by hairline recession with short, broken, hair along the fringe.

Traction alopecia may also be caused from wearing tight headgear for extended periods of time. It may be seen in motorcycle riders, for instance, if a tight-fitting helmet causes excessive friction and tugging on localised areas of hair.

As there is no underlying hormonal or medical cause, the treatment for traction alopecia is simply to identify what’s causing it – headgear, hairstyle, etc. – and stop. Normally, hair will grow back, depending on how advanced the traction alopecia is.

Tinea capitis is a fungal infection which can also cause hair loss.

The condition presents as single or multiple patches or hair loss and the affected skin may be itchy, scaly, and inflamed. It is commonly referred to as ‘ringworm of the scalp’ and may appear as expanding raised red rings similar to ringworm. Hair in areas affected by tinea capitis often breaks off, leaving a distinctive black dot pattern.

Like ringworm, tinea capitis is highly infectious. It is more common among young children, with cases in adults being comparatively rare.

Antifungal drugs, in particular griseofulvin, are highly effective at treating tinea capitis. Unlike other fungal skin infections, tinea capitis medication must be administered orally (as opposed to topically) to penetrate the hair shaft where the fungus lives. The typical dose of griseofulvin is 10mg/kg/day for 6-8 weeks.

Androgenetic alopecia is the most common form of hair loss.

It affects both men and women, but men are more susceptible. 70% of men are expected to experience at least some degree of androgenetic alopecia at some point, compared with 40% of women.

Androgenetic alopecia only affects the hair on the top of the scalp, and usually starts with thinning hair at the temples and/or crown. This eventually leads to the distinctive ‘horse shoe’ pattern of hair loss, as illustrated by the Norwood scale, below: 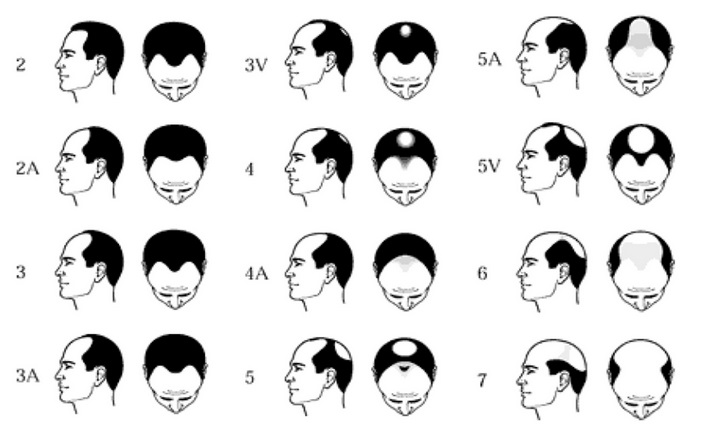 For women, the progression of androgenetic alopecia tends to be slightly different to men. The Ludwig scale was introduced to categorise female pattern hair loss, which usually follows a pattern of diffuse hair loss across the top of the scalp.

Dihydrotestosterone (DHT) is the hormone believed to be responsible for androgenetic alopecia. It is converted from the male sex hormone, testosterone, and is up to five times more potent. DHT binds to the androgen receptor in the hair follicle, causing it to shrink and, eventually, stop growing hair. This process is called miniaturisation.

Androgenetic alopecia is genetically inherited. However, environmental factors can speed up or slow the progression of hair loss.

The treatments available to treat androgenetic alopecia are many. From supplements, to topical solutions, to prescription medications, to surgery and even lasers, there are many treatments for balding people today.