The first thing most people do when they notice hair loss or thinning hair is try and identify lifestyle factors that might be causing it. Of course, genetic factors play a significant role in most types of hair loss, but environmental factors can certainly exacerbate or reduce it. And if you smoke weed regularly, you might be wondering if there’s a connection between cannabis and hair loss. So let’s take a look at the evidence.

With cannabis recently legalised in several more US states, it’s safe to say weed is here to stay. And while the reefer madness hysteria of the past has largely disappeared, there are still serious health concerns about the harmful effects of marijuana.

On the other hand, many health benefits from cannabis use have been identified. From glaucoma to cancer, the range of maladies this ancient herb can alleviate is numerous and growing.

So, could these medicinal properties actually be good for hair? Or does cannabis cause hair loss?

We’ve all heard that stress can cause hair loss.

And while it’s not quite as simple as stress = hair loss, there is some truth to this theory.

Numerous different types of hair loss can be brought on by stress. Perhaps the most common of these stress-related hair loss conditions is telogen effluvium – where more hair follicles than normal enter the resting phase.

See, hair grows in cycles. At any one point, around 85% of your hair is in the anagen (growth) stage. The other 15% is in the telogen (resting) phase. Significant stress can skew this 85/15 balance and force more hair to enter the resting phase. The good news is this condition usually sorts itself out after a month or so.

So how does weed fit into the picture?

Despite its reputation for relaxation, THC in cannabis actually increases levels of cortisol – the stress hormone.

This study, for example, observed that “Δ-9-THC administration raised cortisol levels significantly from baseline in a dose-dependent manner.” Perhaps this explains why paranoia and anxiety can be side effects of cannabis use?

However, the same study also found that this effect was less pronounced with chronic cannabis use. In other words, people who smoke weed regularly get used to the effects of THC and so don’t produce as much cortisol in response.

But telogen effluvium is pretty uncommon as hair loss conditions go. It’s is normally a response to severe stress – the kind brought on by serious illness or bereavement, not from smoking a few joints.

Compared to androgenetic alopecia (male and female pattern hair loss), telogen effluvium is pretty rare. Pattern baldness is certainly not improved by increased cortisol, but its primary cause is a completely different hormone: dihydrotestosterone (DHT).

The munchies: diet and hair loss

It might seem like a bit of a tenuous connection, but there is increasing evidence that diet plays a significant role in pattern hair loss.

And as every stoner knows, smoking weed can sometimes lead to less-than-wise dietary decisions.

As mentioned, the main cause of androgenetic alopecia is DHT. Eating certain foods can increase levels of this hormone, exacerbating and accelerating pattern hair loss in those who are genetically susceptible. 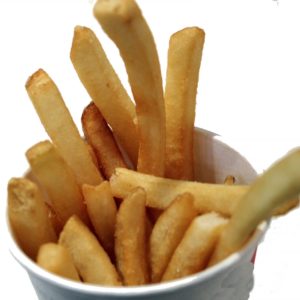 Numerous studies, such as this one and this one, have observed that higher levels of insulin mean lower levels of sex hormone-binding globulin (SHBG).

SHBG binds to hormones – such as DHT – preventing them from binding to hormone receptors. So less SHBG effectively means more DHT and more hair loss.

That said, this isn’t a direct result of cannabis. While marijuana might make you more likely to binge on fries, it’s not a problem if you resist the munchies!

But some studies suggest that cannabis does have a direct effect on hair loss hormones.

A couple of studies – such as this one and this one – have suggested that cannabis use lowers levels of testosterone. Other studies, though, suggest it has no effect.

Of course, it’s not as simple as testosterone = hair loss. But anything that reduces testosterone is likely to also reduce DHT (all things being equal).

Perhaps the most important study – at least as far as hair loss is concerned – is this one, which actually looks at the effect of cannabis on DHT specifically:

“Marihuana and its constitutents delta 9-tetrahydrocannabinol (delta 9-THC) and cannabinol (CBN) were tested for their ability to interact with the androgen receptor in rat prostate cytosol. Smoked marihuana condensate, delta 9-THC, and CBN inhibit specific binding of dihydrotestosterone (DHT) to the androgen receptor with a dissociatin constant of the inhibitors (Li) of 2.1-5.8 X 10(-7)M. in addition, other metabolites of delta 9-THC were also androgen antagonists. This data suggests that the anti-androgenic effects associated with marihuana use results, at least in part, from inhibition of androgen action at the receptor level.”

This is a pretty interesting finding!

What this research suggests is the THC in cannabis actually prevents DHT from binding to hormone receptors. And if DHT can’t bind to the receptors in the hair follicles, it can’t cause hair loss.

Some existing hair loss treatments – such as finasteride and dutasteride – work by lowering overall DHT levels. Reducing the ability of DHT to bind to the receptor, however, is a different angle more akin to future hair loss treatment CB0301.

CB0301 is  a topical hair loss treatment currently in development. It is supposed to work via a similar mechanism described above: stopping DHT from binding to hormone receptors.

Unfortunately, the study above appears to be the only clinical examination of the link between cannabis and DHT.

It’s a bit of a jump from a single trial of cannabis and DHT in rats to the claim that smoking weed could prevent hair loss.

After all, if it were true, there would be no bald stoners!

But it seems strange that there has been such little research into the link between cannabis and hair loss – especially given the findings above.

And with concerns about the side effects of DHT inhibition, tackling the problem from the receptor angle could lead to improved treatments. What’s more, these could be used in conjunction with existing hair loss treatments to produce better results!

There are arguments on both sides of the cannabis hair loss debate – none of which are entirely persuasive.

There are people who smoke weed and still go bald. Similarly, there are people losing their hair who’ve never touched weed in their life. If there is a connection between cannabis and baldness, it’s a pretty weak one.

So if you’re looking to stop hair loss, don’t blame marijuana. It might have a some effect – either positive or negative – but it’s likely to be a pretty minor one. Ultimately, cannabis looks to be a very small piece of the hair loss puzzle. And with plenty of effective hair loss treatments available, smoking the odd joint or two probably won’t make much difference.

2 thoughts on “Cannabis and Hair Loss: Is Smoking Weed Good or Bad For Your Hair?”