We all know that androgenetic alopecia is a genetically inherited condition – the clue’s in the name. But why do some men avoid male pattern hair loss despite having bald parents? And what if your father’s bald – are you destined to lose your hair too? In this post we’ll look at the genetics behind androgenetic alopecia as well as some common questions like: is baldness inherited from Mom or Dad?

Actually, that heading is a bit misleading.

See, current research suggests that androgenetic alopecia isn’t just caused by a single gene. Instead, many genes are thought to be responsible:

“To date, molecular genetic studies have implicated 12 genomic regions in AGA and identified a number of candidate genes. The latter include those encoding the androgen receptor (AR), the histone deacetylases (HDAC) 4 and 9, and the WNT molecule WNT10A. However, the majority of contributing genetic risk factors still await identification.”

Perhaps this is why it’s proven so difficult for science to find a hair loss cure over the years. We know that dihydrotestosterone (DHT) is a major contributing factor, but recent developments in hair loss research have revealed a myriad of other causes too.

For example, recent Top Hair Loss Treatments articles have discussed the impact of WNT, PGD2, and even vitamin D receptors on hair loss.

These factors are all determined – at least partly – by genetics. Studies on twins (such as this one and this one) confirm that age of onset, progression, and pattern of hair loss are genetically determined.

But who’s to blame for these genes, Mom or Dad?

Is baldness inherited from your mother?

It’s a common myth – but one that has some degree of truth to it.

This is because one gene that is very strongly linked with androgenetic alopecia – rs1385699 – is found on the X chromosome. And men only get their X chromosome their mother. 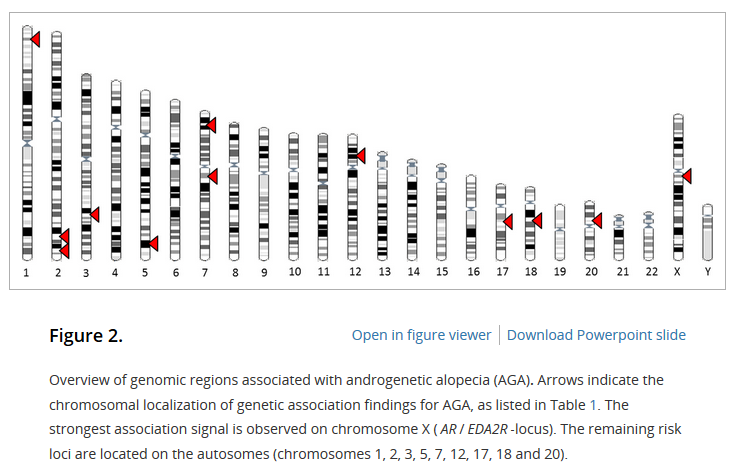 And studies have shown that men with bald fathers are more likely to go bald themselves.

So androgenetic alopecia can be inherited from either parent. But the baldness genes tend to be slightly more dominant on the mother’s side.

Unfortunately, there’s no way to know until it actually starts happening.

But androgenetic alopecia is a highly heritable condition. So if you have a lot of bald or balding people in your family, the more likely you are to lose your hair as well.

Fortunately, there are treatments available to slow and even stop genetic hair loss from progressing.