Antihistamines are commonly used to alleviate the symptoms of allergies. If you’ve ever suffered from hay fever, you’ll know these drugs can be effective at reducing itchiness and sneezing. But antihistamines may also reduce PGD2 levels and inflammation – both of which are linked to hair loss. This has led some hair loss sufferers to try out antihistamines in an attempt to beat baldness. One antihistamine – cetirizine – is particularly popular online for this purpose. But does it really work for hair loss?

Cetirizine is an antihistamine; a type of drug that opposes the activity of histamine in the body.

Histamine is involved in a variety of effects in the body – from immune response to inflammation.

There are a wide range of antihistamine drugs available, but cetirizine is among the most commonly used. Sold under the brand name Zyrtec, cetirizine is available over the counter and is often used to alleviate the symptoms of hay fever and other common allergies. It works by binding to the H1 receptor, which prevents histamine from being able to cause any effects.

So what’s cetirizine got to do with hair loss?

Well, we know that androgenetic alopecia (male and female pattern hair loss) is almost always accompanied by some degree of inflammation. And alopecia areata – a rarer form of hair loss – is known to be caused by immune response. Given that antihistamines like cetirizine impact both these effects, it seems possible that there may be a link.

Androgenetic alopecia is by far the most common hair loss condition, affecting around 70% of men and 40% of women. It has long been thought to be caused by hormones – specifically dihydrotestosterone (DHT). However, this explanation suffers many problems.

Since the publication of this study, a great deal of effort (both in labs and hair loss forums online) has gone into finding compounds to reduce PGD2 in the scalp. This is where cetirizine comes in.

Of course, these studies weren’t necessarily testing it as a hair loss treatment. PGD2 is known to play a role in a number of other conditions, such as asthma.

Nevertheless, there are various reports of PGD2 suppression as a result of cetirizine. This study from 1989, for example, found that:

“Histamine release was not altered by cetirizine treatment, but prostaglandin D2 (PGD2) production, which peaked at 3 to 5 hours, was clearly reduced by cetirizine treatment, being lower at all time points during the reaction; this was significant by analysis of variance (p less than or equal to 0.04). The inhibition was most marked during the fifth hour of the reaction when there was a 50% suppression of the PGD2 level by cetirizine (0.193 ng/ml to 0.075 ng/ml [p less than or equal to 0.03])”

So, if PGD2 really is responsible for pattern hair loss, it stands to reason that cetirizine may be an effective treatment for baldness. But without trials specifically testing for its impact on hair, this is purely speculative.

It’s no different with hair loss. While PGD2 appears to cause hair loss, another prostaglandin – PGE2 – appears to stimulate hair growth.

This is why aspirin looks unlikely to be an effective hair loss treatment. It reduces both the good and the bad prostaglandins equally.

But cetirizine appears to be different. This study on rats found that it actually increased PGE2:

Based on these limited studies, there appears to be at least some theory behind cetirizine for hair loss. So, what about actual results on humans?

I have updated this post to include details of a recent study of topical cetirizine specifically for hair loss.

The study, A preliminary study on topical cetirizine in the therapeutic management of androgenetic alopecia, tested the effects of cetirizine on 67 patients with male pattern hair loss (with 18 patients acting as the control group). The authors report that:

“We found that the main effect of cetirizine was an increase in total hair density, terminal hair density and diameter variation from T0 to T1, while the vellus hair density shows an evident decrease. The use of a molecule as cetirizine, with no notable side effects, makes possible a good compliance by patients. […] Our results have shown that topical cetirizine 1% is responsible for a significant improvement of the initial framework of [male pattern hair loss].“

So, this study appears to confirm the theory. Whether through PGD2 or some other causal mechanism, cetirizine really does appear to be somewhat effective for hair loss.

The photos below are apparently the results (before = top, after = bottom): 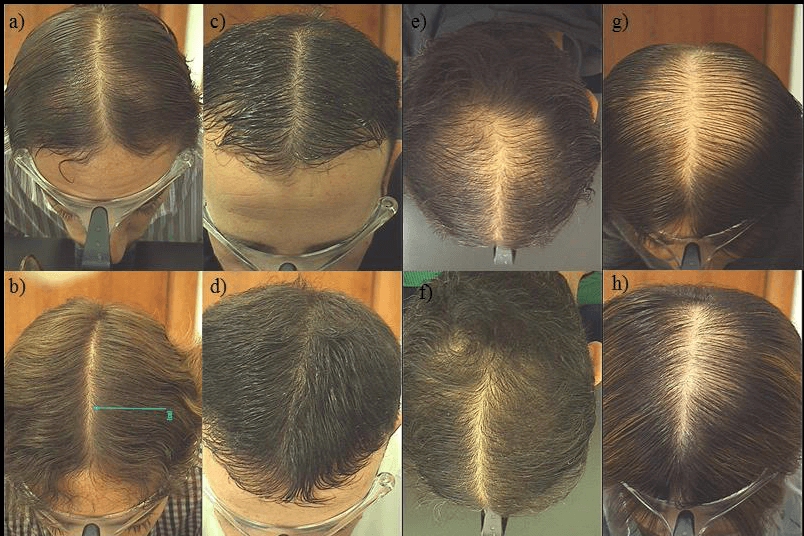 Another study has tested cetirizine for androgenetic alopecia – this time comparing it against the proven and FDA approved treatment minoxidil:

“After 16 weeks, we observed a significant increase in total and vellus hair density in both minoxidil and cetirizine groups, but the improvement was much higher in the minoxidil group. The percentage of hair in the anagen phase also increased in both groups after 16 weeks of treatment, but then diminished after 8 weeks of placebo consumption. No significant adverse reactions associated with the administration of cetirizine solution were reported… Conclusion: Cetirizine 1% solution was effective in hair growth without any complications for treatment of male AGA.”

Efficacy of Cetirizine 1% Versus Minoxidil 5% Topical Solution in the Treatment of Male Alopecia: A Randomized, Single-blind Controlled Study. PMID: 33909554

So, this study seems to show that cetirizine works – at least slightly. Cetirizine resulted in “a significant increase in total and vellus hair density” but was apparently much less effective than minoxidil.

Given that minoxidil is hardly a miracle cure itself, it seems safe to say that cetirizine isn’t the silver bullet for hair loss. That said, it could possibly serve as a useful adjunct to other topical treatments, for example by adding it to minoxidil or topical finasteride.

In addition to this initial trial of cetirizine for hair loss, many forum posters online have experimented with this antihistamine on themselves.

This thread, for example, is over 40 pages long with many different users reporting on their experiences with cetirizine.

Perhaps the most useful information can be found here (note: this is a German forum). One user reported impressive hair regrowth in a previously bald area. Best of all, he provided photographic evidence as proof (click photo for higher resolution):

Interestingly, almost all of these experiments centred around topical application of cetirizine. Users mixed cetirizine tablets and capsules into a variety of vehicles – from minoxidil to ordinary tap water.

Yet despite the initial optimism, enthusiasm for cetirizine died out.

Results were mixed. Some users reported stabilisation of hair loss, others reported increased shedding. Minox86 – the guy in the photo above – reported that despite the initial regrowth, these small hairs never grew any thicker or longer.

As a hair loss treatment, cetirizine has some theory behind it. And this theory appears to be supported by initial controlled trials in humans.

Without more trials and photos, though, it’s difficult to how effective cetirizine really is. Plus, the many self-experimentations documented in hair loss forums used differing quantities, brands, and vehicles for their cetirizine solutions. Drawing conclusions is made even more difficult by the fact that many of these users will have been using other hair loss treatments in conjunction with cetirizine.

It’s safe to say that cetirizine is not a hair loss cure though – nobody went from Norwood 7 to Norwood 1. But the initial studies of cetirizine for hair loss – combined with the compelling anecdotal reports online – suggest there may be something to it as a treatment for androgenetic alopecia.

Discuss cutting edge hair loss research in the forum – no sign up required!

8 thoughts on “Cetirizine for Hair Loss: Are Antihistamines a Cure for Baldness?”